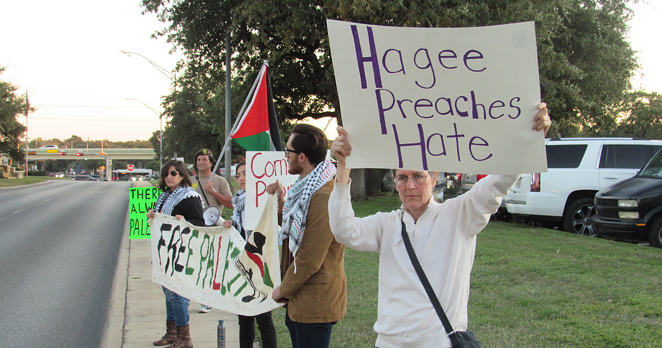 Hagee — who preaches that Palestinians have no right to the land where they reside — is founder of Christians United for Israel, an influential pro-Israel lobbying group. Sunday's annual Night to Honor Israel event regularly draws thousands to hear the pastor's message that the gathering of Jews in Israel is prerequisite for Christ's second coming.

"What John Hagee wants is an extremist policy that inherently requires the ethnic cleansing of the Palestinian people," said Moureen Kaki, one of the protest organizers. "We're a people who have suffered too long under colonial rule and occupation."

The event inside the church featured Mark Levin, a conservative radio talk show host who's accused President Obama of "seeking to destroy Israel" and only liking Jews who supported his campaign.

Hagee was instrumental in lobbying for the Trump administration to relocate the U.S. embassy in Israel to Jerusalem, a move that ignited deadly protests inside the country. The pastor also has a long history of inflammatory statements, including the claim that all Muslims want to destroy Christianity and that the Catholic Church is the “great whore” described in the Bible.

"Our specific issue is the continued support Hagee gives to Israel's war economy for its occupation and genocide against Palestinians," said Judith Norman of Jewish Voice for Peace, another of the protest organizers.

In 2011, activists crashed Cornerstone Church during one of Hagee's Night to Honor Israel events, shouting him down and dropping leaflets from a balcony that included names and faces of Palestinians killed as part of the occupation.