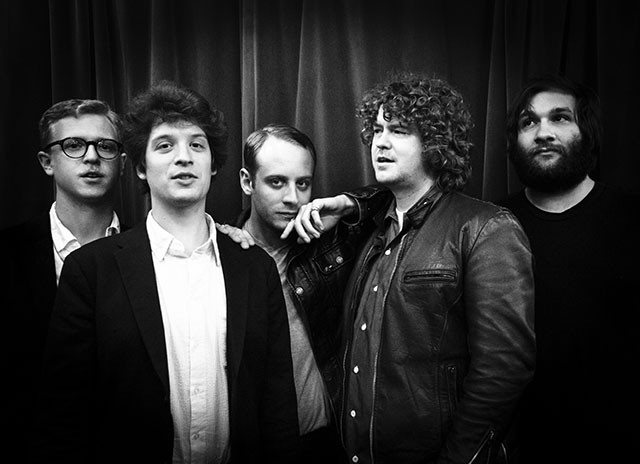 May 1, 3:30pm: According to Deer Tick, this show was canceled after our print publication went to press.

In the new century, Providence, R.I., has established itself as a small, robust musical presence in New England, not unlike the city’s Italian mob to the region’s mafia scene. Fueled by dropouts from the illustrious Rhode Island School of Design, in recent years Providence can claim Les Savy Fav, Lightning Bolt, John Dwyer and folk-rockers Deer Tick as rock ‘n’ roll alumni.

Formed in 2004, Deer Tick plays NPR folk as documented by field recorder Alan Lomax, but filtered and amplified through a Fender reverb tube. With their 2007 debut album War Elephant, Deer Tick turned Americana on its head, trading off between brushstroke folk and venomous rock through the album’s 14 tracks. The early Deer Tick sound is captured on “Not So Dense” when singer John McCauley lays bare his taut frustration, belting “I watched 60 minutes go by hour after hour” as the band makes a hairpin turn from heavy folk to balls-out blues rock.

By their 10 birthday in 2014, Deer Tick had weathered some sea changes. They’ve made appearances on Letterman and Conan, gained a reputation as a killer live band, suffered one as hard-partiers, nurtured and kicked drug habits and seasoned their share of personnel changes. But rather than fill in positions with a roster of play-what-they’re-told musicians, McCauley and Co. picked up contributors of songs and style. One of these acquisitions, guitarist and singer Ian O’Neill, has helped move Deer Tick from a charming lo-fi outfit to an audiophilic folk dream.

“It’s been easy to insert myself into the fold,” O’Neill told the Current over the phone regarding his Deer Tick membership. “It was pretty natural. Otherwise, I don’t think I would’ve stuck around.”

Since joining Deer Tick in 2009, O’Neill has experienced the ebb and flow of a band determined never to settle in the same place. “It’s flown in different directions,” said O’Neill. “It got really simple for a while, simple rock ’n’ roll, then more recently we were doing more ambitious arrangements and instrumentations on the albums, and the shows became a little more elaborate.”

On their fifth full-length, 2013’s Negativity, Deer Tick displays this ornate approach like never before. Horns compete with guitar licks on the solo sections, while organs and strings complement the record’s grandeur. “We had a little bit more direction and ambition to make it sound more hi-fi,” said O’Neill. “Not just the way it sounds, but in the arrangements and attention to detail.”

Still, this attention to detail hasn’t undercut Deer Tick’s pure songwriting. On “The Dream’s in the Ditch,” O’Neill’s best contribution to Negativity, the guitarist/vocalist waxes a bit like Elvis Costello, singing “Well the dream’s in the ditch / and the kids are all pissed,” before a virtuosic, honky-tonk piano solo runs up and down the keys.

One thing’s sure; no matter what changes occur on Deer Tick’s albums, their live aim is true: playing folk that tears down the rafters, capturing the bohemia but none of the pretension of the music’s Greenwich Village roots.