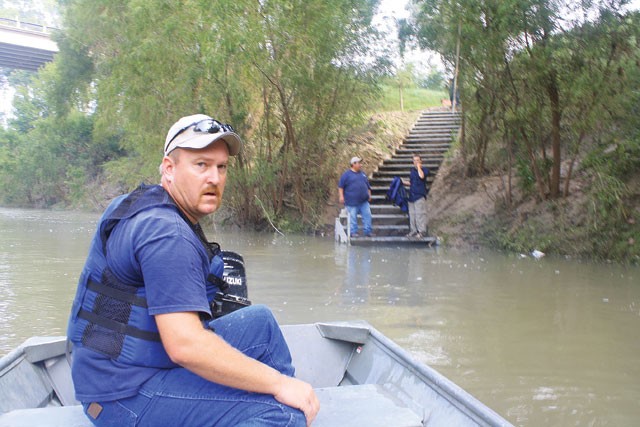 The mist was still rolling gently off the water when Alan Stephenson and Joe Leija placed their flat-bottomed boat into the San Antonio River to show off 12 miles of serpentining paddling territory being officially opened by the San Antonio River Authority this weekend*. Recent showers had leaf litter and plastic debris clinging high in the trees along this edge of Bexar County, but the fast-moving current encased in muddy banks looked a whole lot like the river would have looked upstream before sustained flood control projects led to the commercial corridor known as the River Walk: that slow-moving horseshoe of water that would inspire Dallas Mavericks owner Mark Cuban to level a stinging appraisal of our labor. Our re-engineered river, it turned out, was an "ugly-ass, muddy-watered thing." Of course, most of us already knew that — and many were still struggling to correct it.

Back under the shadow of 1604 a few miles east of U.S. 37, a SARA employee moves the jon boat downstream, only a collection of automobile tires and a stray football wedged in woody flotsam betray the nearness of a city upstream. Here, just a few miles from town, is the San Antonio before the Spanish starting cutting acequias to feed the missions. It's the river that brought Native Americans to the sacred headwaters millennia ago and marked the generous springs as a trading place for people across what would become known as the Americas. And thanks to recent years' volunteer and multi-agency efforts, it's getting closer to that wild state from King William to Mission Espada. More subdued flourishes of natural enthusiasm are found north of the River Walk along the Museum Reach, as well.

Last week, drummers in San Pedro Park welcomed to San Antonio Native American runners participating in a challenging, bi-hemispheric Peace & Dignity Journey, an attempt to unify indigenous peoples far and wide and raise our collective awareness about the importance of water. They sang "Yanaguana. Yanaguana," chanting an earlier name of the river. It's a song sung by tribes across the country, one drummer said. "If there is no water, there is no life," another drummer said matter-of-factly in Spanish. But there was something especially sacred about this spot, this gathering place, said another. Yet for the majority of San Antonians drawing water from the faucet or hose, particularly those that haven't gotten onto the river, it's still a little like Cuban's assessment. The drainage ditch of the recent past lives on in residual memory.

Randy Hohlaus, past president of the Alamo City Rivermen, started paddling the river in the early 1990s. "Frankly, back then people were, 'Why are you doing it? Why would you go down there?'" Hohlaus said. "It was hard to convince people it was an interesting place to go. … I think the idea that people would actually be in the river and be using it for recreation in terms of boating, kayaking, paddling, canoeing, was also kind of foreign to San Antonio at that point." But water quality improvements have helped make the idea more palatable: starting from the very top of the line at the San Antonio Zoo, where the hippo tank used to flush fecal matter directly into the river on a daily basis. Of course, for a time, the whole zoo flushed freely into the river. "I remember walking through and seeing zookeepers washing out the various cages and it going down into the stream," said San Antonio Water System spokesperson Anne Hayden thinking back on her childhood. "I think most people are a lot smarter now, including the people at the zoo. The city no longer does as much washing of the sidewalks into the storm drains.

They have to do some of it, but they try to capture that [water]."

And while some were tentative when SAWS started injecting large volumes of treated recycled water into the river back in 2000, in part to speed the river through the River Walk, the river has seen other improvements up in the headwaters, Hayden said. "There's more fish than ever there, and I know some sensitive species are returning.

"It's never gonna be Blue Lagoon," Hayden continued. "It's not a swimming pool." And thank God for that. She's our living Yanaguana. Those who need a reminder that she is a vital force — or need to be freed from the stain of Cuban's slur once and for all time — should join SARA this Saturday at its new 12-mile Saspamco Paddling Trail in celebration of Public Lands Day. If you don't have a canoe, meet the group at the outtake, SARA's new 98-acre Helton Nature Park in Wilson County, where you can find live music, geocaching, hay rides, and a casting clinic to keep you busy.

Public Lands Day organizers expect more than 170,000 volunteers at more than 2,000 sites around the country to pitch in by improving and restoring parks and gardens and beaches that the public owns in common. So if you hit the Saspamco, bring a bag or two to collect trash as you float. Other local opportunities include removing invasive species at Brackenridge Park, upgrading trails at Canyon Lake, preparing a new campground at Government Canyon State Natural Area, and planting native grasses at Phil Hardberger Park*. For even more events and ways to help visit publiclandsday.org. For more on paddling, hit up sara-tx.org.

* Most Public Lands Day events around San Antonio, including this one, are being cancelled in anticipation of rain. Watch publiclandsday.org for updates.