The release is the second phase of the rapper’s Deja tu Huella campaign, which aims to celebrate the impact that Hispanic culture has made on today's society. Deja tu Huella translates to "leave your mark.” 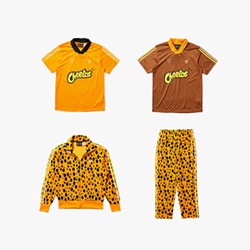 As you can see, the “Cheetos Look” is exactly what it sounds like. The limited edition items feature the signature orange hues of the crunchy snack, brown and black details, adidas stripes and — of course — cheetah print.

While the limited release gear isn't widely available to the public, the collab has created a way for us common folk to potentially have a piece of that sweet, sweet Cheeto cheddar.

As part of the Deja tu Huella campaign, Cheetos and Bad Bunny are holding a contest that will identify ten students leaving their mark on their community and reward them with $50,000 each that can go toward their education.

To enter the #DejatuHuella TikTok Hashtag Challenge, fans can submit a 60-second video that shows how they are leaving their mark on the community, the culture, or the world. They must tag @Cheetos, #DejatuHuella, and #Entry to be eligible.

Submissions can be made now through August 18, and winners will be announced by the end of 2021.