Pump Up the Volume: A Guide to San Antonio’s Music Scene

Welcome to San Antonio, friend! Like any big city you’ve lived in or traveled to, the live music scene here continues to grow and change offering a kaleidoscope of different genres of music from venues all across the Alamo City. From the Aztec Theatre morphing into a high-caliber venue that’s now booked by Live Nation’s House of Blues entertainment unit (which books acts like Marilyn Manson and Lauryn Hill) to the hard rock and metal staple the White Rabbit transmuting into Paper Tiger (which books a dope roster of indie bands spanning a multitude of genres), there’s pretty much a show every week for every musical taste in SA.

Established in 1999, Sam’s Burger Joint (330 E. Grayson St., samsburgerjoint.com), hosts some the best folk and Americana acts rolling through town while serving up some pretty damn good burgers. A brisk stroll down Grayson and you’ll find yourself on the St. Mary’s Strip, the closest thing SA has to a live-music and entertainment district. First up is Hi-Tones (621 E. Dewey Pl., hitonessa.com), home to the amazing chamoy and pickle shots and host to a wide variety of bands that will be sure to get you dancing. Just up the street is The Amp Room (2407 N. St. Mary’s St., theamproom.com), which regularly features everything from EDM to neo soul and hard rock. You might even feel like you’re at the old Emo’s in Austin if you hop across the street to catch a show at Paper Tiger (2410 N. St. Mary’s St., papertigersa.com) as it books some of the best hip-hop, indie rock, and post-punk you can see in town. Unless you want all of that for free, in which case visit The Mix (2423 N. St. Mary’s St., themix-sa.com), the never-a-cover divey staple of SA rock, which is right across the street.

Farther up the Strip sits Limelight (2718 N. St. Mary’s St., thelimelightsa.com), which offers an eclectic musical mix that many local and traveling acts love to hit up on account of their great sound system. Also peep the best taco truck on the strip, (El Regio #2) parked right next door to help soak up that Lone Star. A short walk north and you hit The Squeezebox (2806 N. St Mary’s St., facebook.com/thesqueezebox), a charming establishment with a vibe that appeals to industry folk, 20-somethings that appreciate a good DJ set, or anyone who loves good tejano, conjunto, cumbia or a random jam night with Santiago Jiménez (and if you don’t know who that is, try Googling “San Antonio” and “National Medal of Arts”). Barely a block away is La Botánica (2911 N. St. Mary’s St., vivalabotanica.com), which has become a cherished safe space for LGBTQ and non-binary San Antonians to sing, dance and play (also, their all-vegan menu is legit). Rounding out the Strip’s north end is Faust Tavern (517 E. Woodlawn Ave., facebook.com/thefausttavern), a charming and tiny dive that hosts a variety of bands and DJs. 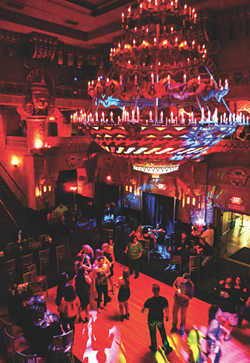 If you move west, sitting right off Ashby and Blanco is Web House (320 Blanco Road, facebook.com/web.house.satx), which often features music from club to trap to vaporwave, along with Russian brews and Eastern European food.
The downtown area is now home to a number of particularly solid venues, such as the Aztec (104 N. St. Mary’s St., theaztectheatre.com), Majestic (224 E. Houston St.) and Empire theaters (226 N. St. Mary’s St., majesticempire.com), all of which book everything from Austin City Limits spillover bands to big-name classical, pop and country performers. And now the massive Tobin Center for the Performing Arts (100 Auditorium Circle, tobincenter.org) hosts everything from Nas to Dolly Parton. Then moving toward downtown’s northern edge sits Ventura (1011 Avenue B, theteneleven.com), one of the best, most un-pretentious establishments you’ll find along the sparkling Museum Reach that often hosts some of SA’s best homegrown talent. Finally, just a few blocks east of downtown is Alamo City Music Hall (1305 E. Houston St., alamocitymusichall.com), where you’ll find some of the best R&B, hip-hop, metal and post-hardcore. Moving farther east, you’ll find the Carver Community Cultural Center (226 N. Hackberry St.). With emphasis on its African and African-American heritage, the Carver aims to celebrate cultural diversity by providing premier artistic presentations, community outreach activities, educational programs and amazing musical showcases.

Not to worry outer-Loopers! There are stellar options for anyone who wants to stay on the periphery. The Rustic just opened in September of 2017 and hosts a variety of country and Americana. One of the best places to catch live music outside of Loop 410 is 502 Bar (502 Embassy Oaks, 502bar.com), which boasts one of the better sound systems in town. Also outside the Loop is Fitzgerald’s Bar (437 McCarty Road, Suite 101, fitzrocks.com), where you might find a local hip-hop cypher session, some local alt-rock vets, or a singer-songwriter showcase, depending on the night. If the sound of banjo and acoustic guitar is more your thing and you wanna get real far outside the Loop, check out the inimitable Floore’s Country Store (14492 Old Bandera Road, Helotes, liveatfloores.com) – or, if you wanna venture even farther outside of town, ride up to New Braunfels’ iconic Gruene Hall (1281 Gruene Road, New Braunfels, gruenehall.com) for some of the best touring country and Americana this region has to offer.