Punk OFF!: The Merits of Greg Ginn’s Black Flag and Keith Morris’ OFF! 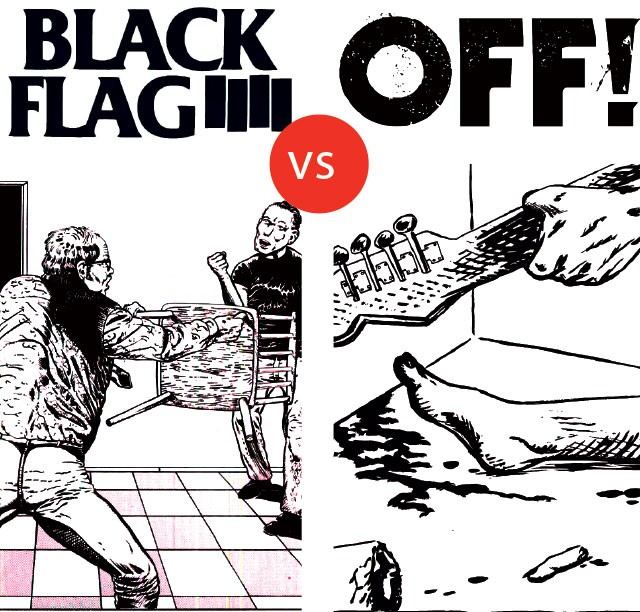 It’s the punk equivalent of John Lennon and Paul McCartney playing the same venue two days apart from each other. In a cosmic event of synchronicity, or just some coincidental booking, Black Flag and OFF! both visit San Antonio this week. Though Flag’s Greg Ginn and OFF!’s Keith Morris aren’t on speaking terms today, in the late ’70s, the twosome helped forge hardcore punk with manic speed and a blistering work ethic. To celebrate the pair’s separate arrivals in San Antonio this week, here’s a brief matchup of these two heavy music pioneers.

As the only permanent fixture of Black Flag through its many years, Greg Ginn continually pushed the band’s aesthetic beyond the expectations of punk. Beginning with the four-track, five-minute Nervous Breakdown EP in ’78, Black Flag embedded themselves within the tradition of the Ramones and New York Dolls. At the same speed as their progenitors, the Hermosa Beach quartet burned away all but the essentials, placing Ginn’s growling power chords and Morris’ high groans.

By the first LP in ’84, Morris was long gone, while Ginn had fundamentally switched his style for the savage and emotionally exhausting Damaged. In Our Band Could Be Your Life, Michael Azerrad’s seminal document on the American underground, Azerrad cites the absence of bass in rehearsal as the motivating nudge for Ginn’s stylistic change. Ginn in ’84 sounds almost nothing like he did in ’78, manipulating the low end of his instrument with a crafted sloppiness. When he breaks out of these depth charges, Ginn jams atonal on the upper register, like he’s trying to break the guitar, not play it.

Though Ginn’s DIY work ethic and unrelenting commitment helped take Black Flag to new heights, these traits would prove to be his tragic flaws. Through the band’s ’78-’86 run, Ginn managed to alienate almost every Black Flag member through personal potshots or by implementing a grinding tour schedule. Like a veteran athlete overworking a bum ankle, Ginn pushed the band harder than it was willing to go.

In 2013, with Jealous Again-era singer Ron Reyes, Black Flag set off on tour, only to be confronted by FLAG, a Keith Morris-fronted outfit playing the BF discography. As the Morris band succeeded and Ginn’s rendition faltered, Ginn switched out Reyes for tour manager Mike Vallely.
Though Vallely, a pro skateboarder, doesn’t have a claim to the glory days of the band, as a dude charged with a unique opportunity, his energy helps fly Black Flag as high as possible.

Throughout Black Flag’s original run, Ginn’s brother Raymond Pettibon graced the band with his ink-drawn iconography. From the epochal four-bar logo to the gnarly black ink cartoons on the EP covers and gig posters, Pettibon’s work nailed the attitude and intensity of his brother’s music.

For What The…, Black Flag’s 2013 passing grade return, Black Flag ditched the Pettibon art of old, opting for a nauseatingly bad image of a vomiting emoji to decorate the cover. Meanwhile, Keith Morris and his super group OFF! slapped three gritty portraits from Pettibon on their scorching trio of new releases.

Pettibon’s stamp of approval marks a changing of the guard, with Morris and OFF! as ideal candidates to hold down the old school aesthetic. With Morris, guitarist Dimitri Coats (Burning Brides), bassist Steven Shane McDonald (Redd Kross) and drummer Mario Rubalcaba (Rocket from the Crypt), OFF! rarely cruises much longer than a minute, condensing everything they’ve got into their precise tunes.

“We’re four, fun-loving, mischievous, know-it-all, rockin’ dudes,” Morris told the Current when OFF! came through in 2012. “Do not refer to us as punk or hardcore—we are a rock band. And we’re angry. Because we’re angry and we know we don’t have a lot of time to hang out, we got to get in and get out, trim the fat, and have a great time.”

Thirty-six years after the debut of hardcore in Nervous Breakdown, it’s an extraordinary feat that Morris can still get in the van and go, let alone outdo musicians a third his age. Save his gross-out dreads, Morris’ defining feature is his sure-headed conviction. Without his zealous belief in this music, there’s no way he could assault his body on a nightly basis, or express the concentration of OFF!’s anger—surely it’d be easy to mess up and get angst-ridden on tunes like “Now I’m Pissed” or “Full of Shit.” A true lifer, Morris has backed himself with a focused group of musicians looking to stave off the stigmas of old age and just shred.