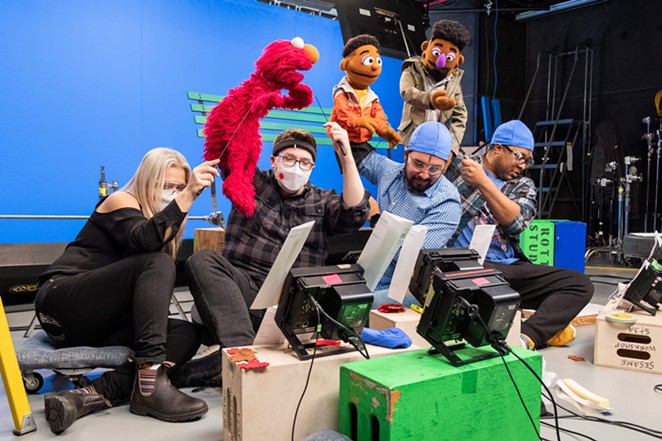 As a child growing up in Brownsville, Bradley Freeman Jr. was fascinated by puppets. A fan of practical effects, he watched TV shows including Sesame Street, Bear in the Big Blue House and Between the Lions with wide eyes and wondered how the plush characters were moving.

“There was something special about these real puppets interacting with real children,” Freeman, 22, told the Current during a recent interview. “They could reach out and shake Elmo’s hand or give Big Bird or Barney a hug.”

But when Freeman’s grandparents bought him the original The Muppet Show on DVD, he went from fascinated to hooked. The collection included behind-the-scenes bonus features that showed how the puppeteers brought Kermit the Frog and Gonzo to life.

“I had never seen that before,” he said. “That’s when I knew like, ‘Oh, my goodness. This is a job. I want to do that job.’ The magic became more substantial to me because it turned into something that was possible.”

After graduating from high school in 2016, Freeman moved to the Alamo City, where he attended San Antonio College to study radio, television and film for a couple of years before transferring to the University of Texas at San Antonio to study communications.

Freeman, who graduates next month, said his initial post-degree plans involved landing a job and working his way to “financial stability.” That way, he could pursue his dreams to become a professional puppeteer.

“That ended up happening sooner than I expected,” he said.

The jumpstart for Freeman’s puppeteering career goes back a couple of years.

In 2018, he sent in an audition tape for an international workshop that Sesame Street was holding in New York City to find young puppeteering talent. He was one of the 30 people chosen from 400 applicants to study with industry legends such as Matt Vogel (Kermit the Frog), Peter Linz (Ernie), Marty Robinson (Mr. Snuffleupagus) and Leslie Carrara-Rudolph (Abby Cadabby), among others.

“I ended up learning from all my heroes,” he said. “To be in the same room as them and to be taught by them was an absolutely magical experience.”

Last November, Robinson emailed Freeman to check in and see how he was doing. During their exchange, Freeman sent the Sesame Street player his puppetry demo reel for some feedback. The following morning, he received emails asking if he’d like to audition for a pair of new Sesame Workshop characters.

“I didn’t know what they looked like, but I got their bios and started to think about the voice I could put to these characters,” Freeman said. “Then, they set up an appointment with me, sent me a puppet from Jim Henson’s Creature Shop, and then I auditioned over Zoom. I kept thinking, ‘Man, when I don’t get it, this is going to be a great story to tell.’”

But he did get the job.

Last month, Freeman, who is Afro Latino, made his debut as the newest puppeteer with Sesame Workshop. He was cast to perform and give voice to new puppet character Wesley Walker, a five-year-old Black Muppet who, along with his father Elijah, helps families talk about race and racism.

Currently, Wesley and Elijah are featured on an exclusively online series called ABCs of Racial Literacy. In one episode, Wesley explains to Elmo why people have different skin color. “It’s because of melanin,” Wesley the Muppet says. In another episode, Wesley, Elmo and a couple of other friends sing a song called “I Am Somebody” about the beauty of being different and standing up against racial injustice.

Sesame Street never avoided addressing heavy topics like grief, disability, homelessness and divorce in an age-appropriate way. Its comprehensive effort to tackle the issue of being Black in America is something new, though. Freeman hopes Wesley can be a catalyst for family conversations about race and racism.

“I have so much to learn myself, so I feel like I’m experiencing it along with families across the world,” he said. “I feel the same sadness and anger and fear that Wesley sometimes feels, but by the end of the script, I end up feeling better. I’m so proud to be a part of this conversation. If we can mention it, then we can manage it.”

While some may not think a 3-year-old child should be exposed to the issue of racism at such a young age, Freeman sees it differently. Society needs to do more than just be “not racist,” he said. It’s time to “turn the tide and become anti-racist.”

That’s the message Sesame Workshop wants to get across with its new initiative. A 3-year-old isn’t too young to learn how to celebrate differences.

“We need to get ahead of the game and tell children, ‘Yes, people look different, but they are not less valuable,” he said. “We can teach them inclusion, love, recognition and representation.”

To see all the videos and for more resources on Sesame Workshop’s new initiative on racial justice, visit sesameworkshop.org/comingtogether.