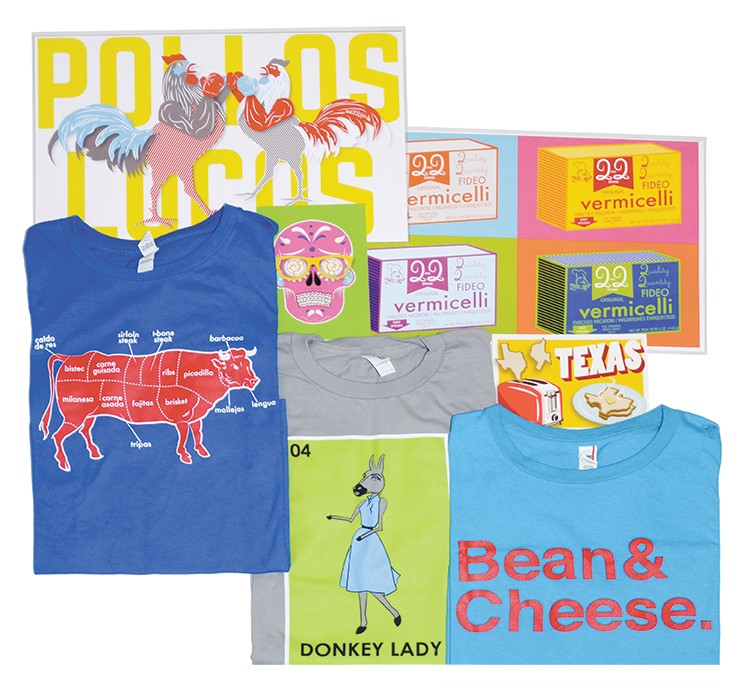 The trio of masterminds behind BarbacoApparel have built their brand by keying in to what makes San Antonio a unique spot. Every product that husband and wife duo Matt Contreras and Nydia Huizar — along with business partner and close friend Richard Diaz — create touches on those key elements: what it means to be a San Antonian, with a distinguishable Latino flavor.

After starting out small, their products have slowly but surely gained a cult following. The trio sat down with the San Antonio Current to discuss the brand, the sometimes horrified reactions people have to some of their products (one in particular) and how people from Indiana don't know what a bean and cheese taco is.

So, first things first, what is BarbacoApparel all about? How would you describe your style and brand?

Richard Diaz: I'd say we're an apparel company for Texans and, more specifically, San Antonians. Definitely puro San Antonio, with also a touch of Texas, too.

Matt Contreras: The initial idea was to have tourist-type shirts, but the kind that only people from San Antonio would get. Most of our designs are throwbacks to our childhood. We're Hispanic and we want to capture our heritage. We're about Texas and San Antonio, so we're just trying to have T-shirts that represent those kinds of aspects.

Nydia Huizar: Yeah, we definitely try to incorporate a lot of nostalgia into our work. Because, you know, you can go to any store and find a T-shirt that you kind of like, but that doesn't represent you on a personal level. As an example: our fideo art. I grew up eating that pretty much every single day. Having it as a print or as a T-shirt is kind of cool because this is my childhood. It tugs at the heartstrings.

You guys use social media and e-commerce and you're out at all the fairs and pop-up markets. Was that always the business model?

MC: Yeah, I think from the beginning, to brand ourselves. In hindsight, it probably would have been better to wait a few months until we had our second line of shirts before we launched, but we really wanted to have a cohesive look and image to put forward from the beginning. I think that has really paid off, especially now as we're getting a little bigger.

RD: Yes, I agree, it was from the get-go. We knew that we had to go out and present our work to the locals. We started finding ourselves in the local art community and going to any events we could find.

What's been the reaction at the fairs and markets and festivals?

NH: So far, everyone has loved it. To date, I think there's only been one person who's been disgusted with our shirts (laughs). Pretty much everyone has responded well to them. Whether or not they have any first-hand experience with the products, like the fideo, they're really excited to see these iconic images from San Antonio or their childhood on our products.

MC: Unless you're actually in the booth to see it happen, it's kind of hard to describe. It's really kind of magical. From our very first customer, this lady came up and immediately got the concept. To watch people walk by the booth, stop, come back and stare kind of wide-eyed at the stuff is the best feeling in the world. The reception from the community has been nice.

Is there a favorite design at this point? Has there been one that has taken off more than another?

RD: Yeah, I think we all have our one or two favorites and sometimes they'll switch, especially if we're excited about a new design. I'd say one of my favorites is the Donkey Lady or maybe the fideo. I'd say the bean and cheese is one of our most popular shirts right now.

MC: I love the cow. I think that's really the most unique interpretation of that type of design that we've seen. I think it's a really good blend of Hispanic and Texas food culture. Bean and cheese, our calavera and the cow are our top three selling designs. We were doing a pop-up show this year and we had a guy from Indianapolis buy the bean and cheese shirt and then afterward asked me what it meant!

What's the deal with your love of Randy Beamer? I know he has since come out and talked about his shirt. How did that come about?

RD: Randy Beamer is the best! We would sometimes talk about him at work and say how we were fans of him on WOAI. He's just got that charming character, and he's funny. We knew he had a fan base and so we had to pay homage to him in SA.

NH: I don't want to say it's an obsession since that word has a pretty negative connotation to it. I just think he's iconic to San Antonio. With the whole nostalgia theme that we've tried to build into our brand, when I think of San Antonio and staple figures and imagery, he's what comes to mind.

MC: We were on SA Living the week of King William Fair and we débuted the new version of the shirt there and we left them one to give to him. And we were at King William and were packing up when he came up with his family and asked for Nydia by name! That was pretty awesome! 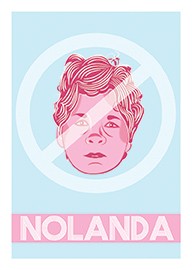 I have to ask about the "Nolanda" print. It was pretty ballsy to put Yolanda Saldivar on a product to sell. What can you tell me about that and what has the reaction been to that design?

MC: It's probably the best design we have just to see the reaction people have from it. We knew we wanted to do a Selena shirt, but have a different angle on it. We eventually landed on that one. It's great because people will look at it and then look at us and go, "Is that Yolanda?" (laughs). And when I tell them "yeah," they'll either be super excited about it and buy the cards or they'll be disgusted by it! It's pretty great.

What are your ultimate goals for the business?

RD: I think we'd love to see the business expand and grow, see how far we can take it. Who knows, though. We just hope that we can continue to create things that San Antonio enjoys.

MC: I think definitely right now we're focused on growing the online business. I think right now online and wholesale is our focus for the business. We'll see where that goes. I never anticipated it getting as big as it has gotten. I never really thought anyone would actually like our shirts!

NH: I definitely want to see a more fleshed-out product line. Right now we only have T-shirts and prints and postcards. I don't want us to ever leave Texas as a home base but there are Texans and Hispanics everywhere.