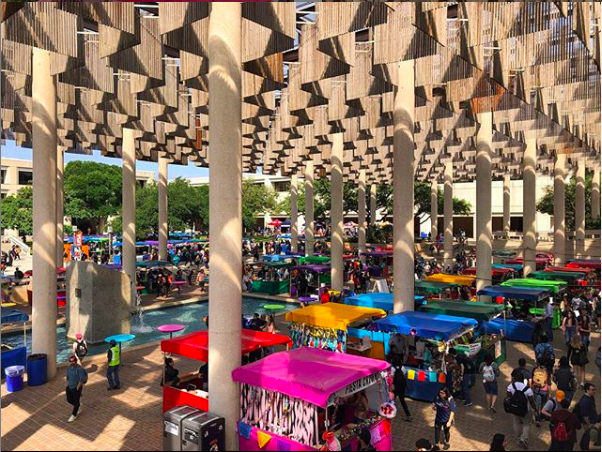 A student's clapback to a University of Texas at San Antonio Instagram post on the history of Fiesta has opened up dialogue on inclusiveness between the school's president and a campus Mexican-American studies group.

The incident started last week when university officials posted a video on Instagram with a message reading: "Hey ‘Runners, did you know Fiesta’s roots date all the way back to 1891? It began as the Battle of Flowers, and honored Texas’ fight for independence."

Hey ‘Runners, did you know Fiesta’s roots date all the way back to 1891? It began as the Battle of Flowers, and honored Texas’ fight for independence. Now, it’s San Antonio’s signature festival, and one of our favorite times of year. Check out the history of Fiesta at #UTSA 👀🥳 Full video at the link in bio 🤙🏼

Lukas Valdes — president of UTSA's Mexican American Studies Student Organization, or MASSO — posted a response asking the university to stop promoting Fiesta "without recognizing the real history behind it."

Valdes also fired off an email to UTSA President Taylor Eighmy offering to staff a booth at the university's annual Fiesta UTSA on Friday, April 12, to discuss how slavery and manifest destiny are interlinked with Texas independence, which Fiesta is meant to commemorate.

"We love UTSA and we think it is important as a higher education institution to always ask how [we] can make things more inclusive and diverse," Valdes wrote.

Eighmy not only responded to the email, but offered MASSO a table at Fiesta UTSA. University spokesman Joe Izbrand said registered student organizations are regularly invited to set up tables at campus events to engage in dialogue.

"It's all part of the process of encouraging public discourse, which is what we do as a university," Izbrand said.

Valdes and his group took up the president's offer and members distributed around 100 flyers raising concerns about what Fiesta actually celebrates.

"From the feedback I got, a lot of people were surprised that they didn't know that part of the history," Valdes said.

As part of the outreach, the group will also meet with Eighmy early next month to discuss concerns about whether the university, which touts its Latinx-friendly learning environment, is living up to that reputation.

Valdes pointed to a 2017 incident where a white supremacist group hung racist banners on campus and a more recent incident in which a professor called campus police to escort a black student from her class as signs the university has room to improve.

He said the original Instagram post also suggests the school should draw more heavily on the knowledge of its own ethnic-studies faculty.

"It's kind of surprising to me that when you have faculty here who have spent a lifetime studying this stuff that [the university] wouldn't have reached out to them for reference," he added.