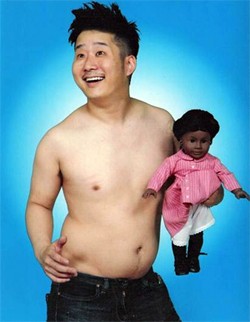 Eleven years have passed since comedian Bobby Lee made a trip to San Antonio to do a stand-up performance. Lee, who is best known for his role on the sketch comedy series MADtv, will take the stage at the Laugh Out Loud Comedy Club from September 30 to October 2.

During an interview with me last week, Lee, 39, talked about his life as a comedian after MADtv was cancelled in 2009 and tries to explain the weird stigma former cast members of the show still fight in the entertainment industry today.

Why has it taken you so long to get back to San Antonio?

I was on MADtv for so long, I really didn’t go on the road. Now, I’m doing it a lot more and it’s been a lot of fun. I’ve been going on the road off and on for two years. So, I’ll go on the road and then do some acting shit and then go back on the road.

Is it just because you found more time to tour after MADtv was cancelled in 2009?

Yeah, I mean, after MADtv I didn’t know how to survive – you’ve got mortgages n’ shit. So, I just decided to go back on the road. When you do a show for that long and then it’s cancelled, nobody wants you for a while.

Are you used to not having the show there for you anymore?

Yeah, I mean, when you’re seeing the same people every day for eight years and then you don’t have them anymore, there is this gigantic void that opens up. I’m just blessed I can do stand up. It’s better, in a way, because it’s my voice and I get to dictate how I want to do it.

I read about how your parents weren’t really happy when you decided to go into comedy until they saw you on MADtv. When the show ended, did they think you might find a regular job?

They have no idea what I’m doing. They don’t understand how the business is run. They’re just glad I don’t call them for money anymore. I used to call them for money like, “Can I have $100?” Now that I’m not doing that, they think I’m fine. It’s weird.

They just know you stay busy.

Didn't you bring your parents on MADtv a few of times though?

Yeah, they were on it. I brought them on like three or four times, but they still don’t know what goes on. Actually, they still get residual checks since the show still airs in other countries. Every time they get a check my dad will call me and be like (in an Asian accent), “I didn’t do anything.” He can’t believe they get free money. It blows his fucking mind.

What would you be doing if you decided you didn’t want to do comedy anymore after MADtv ended?

I've been seeing you on Chelsea Lately a lot recently.

Yeah, I just did it again like 10 minutes ago. All of a sudden I started doing Chelsea and it was like I became relevant again. She’s an old stand-up friend from way back in the 90s. I thank her every day for putting me on her show. She really reinvented me in a way. She got me back on TV. I mean, MADtv had such a weird stigma to it. People in the business hated it. They think it’s awful. All the MADtv people that were once on it still get fucked.

How does a show that was on for 14 years get hated so much?

I have no idea. I mean, we got zero advertisement. We never had a billboard. We were never in magazines. We were never advertised at all. The reason they couldn’t cancel it was because we still got pretty good numbers. After 14 years, they decided to yank it and they still haven’t really filled that time slot with a permanent show. Yeah, but they hated it. There are still casting directors now that won’t see me for anything just because I was on MADtv.

Looking back now, what do you think of the show?

I mean, a lot of it wasn’t funny, but a lot of Saturday Night Live shit wasn’t funny either. There were a lot of sketches I did that I was really proud of and then there were some that were garbage. But that’s how television is. Every TV show does shitty things, know what I mean? But SNL was such a big dynasty – and still is – so how were we going to fight against that?

You know, now that I think about it, I can name handfuls of former SNL cast members that have gone on to have huge careers in the entertainment industry, but I can’t think of one from MADtv. Is there anyone?

We have people with cultish followings like Artie Lange. Then we have Orlando Bloom (he meant Orlando Jones). He was doing a bunch of shit for a while. Alex Borstein is a producer on Family Guy (and the voice of Lois Griffin). Even me, I’m doing OK. I have Harold & Kumar 3 coming out soon. I’m in the new Sasha Baron Cohen movie. I worked with Ben Kingsley and Edward Norton in that one. It’s not like we’re losers. It’s just the fact that there is no one that has hit it huge. We don’t have our Adam Sandler or Eddie Murphy yet.

So, if you could do it all over again, would you do MADtv?

Yeah, because I made a name for myself on that show. A lot of my friends ask me why I did the show. Well, for one, I was broke and struggling and they offered me money. Who’s not going to do it? Who says no to a TV show? As an Asian American comedian, I paved the way for a lot of people like Margaret Cho paved my way. I’m a part of Asian American lineage when it comes to show business.

Are Asian American comedians supportive of each other in the business?

Oh, yeah, there are no weird egos or anything like that. Like, I’m good friends with John Cho from Harold & Kumar. We became friends because a long time ago we both auditioned for the role of Harold and it came down to the two of us and he got it. John and I are like brothers. It’s great because Asian Americans are doing well now. We’re on TV more. It’s a reflection on how things are changing. We’re all trying to support each other.

Would you like to be the first cast member from MADtv that breaks out and becomes a big star?

I mean, that’s not up to me. It’s not really something I even know if I want. At the end of the day all I can do is my job as a comedian and get laughs. All I know is that I just want to work, so I can eat. So, yeah, I’m eating. I’m helping my family out. I love where I’m at. I’m a survivor.