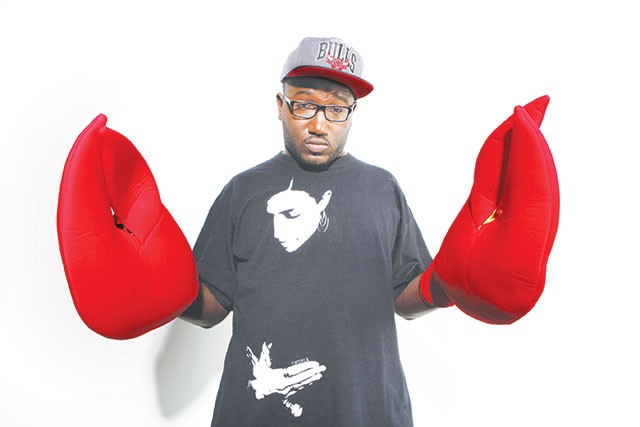 Before he even dropped his debut album (2010’s My Name Is Hannibal), stand-up Hannibal Buress was called a comic to watch by the likes of Variety and Chris Rock. Without ever having written a sketch, Buress reportedly secured a writer’s gig on Saturday Night Live in 2009 because of a killer set on Late Night with Jimmy Fallon. Considering the SNL writers’ room (and then the 30 Rock writers’ room) could only distract Buress from his stand-up act for a single season, the clearest indicator of the power of Buress’ comedy comes from his performance material. To illustrate how quickly he’s ascended, the best-known bit from his first album is about saving jars of pickle juice to flavor his sandwiches. Four years later, his latest special—Live from Chicago, which aired on Comedy Central in March—features a story in which Buress meets Scarlett Johansson and finds out he’s one of her favorite comedians. Miraculously, he’s equally likable (and funny) delivering both. We caught Buress—who can currently be seen on The Eric Andre Show and in the recurring role of Lincoln on Broad City—on the phone in between appearances at Bonnaroo (where he led the crowd in a sing-along of R. Kelly’s “I Believe I Can Fly”) and Miami (where he recorded a series of Vine videos in a Spurs jersey following the NBA Finals).

Bonnaroo was a lot of fun, man. One of the best possible experiences. ... I got to interview Danny Brown while driving a golf cart. … I got to get on stage and dance a little bit during Chance the Rapper. … I got to perform a lot and do a lot of different things, see a lot of great music. A lot of people there were on drugs and acting weird, moving their mouths all weird. It was a good time.

Live from Chicago featured a few bits with sound cues. Are you still experimenting with the traditional stand-up form?

I just like [to] see what I can do with comedy beyond just the standard stand-up—which I enjoy doing. … I like to incorporate music and sound and see what I can do with different light effects and stuff like that just to mess with it, use the space. I like talking and doing bare-bones comedy, but I enjoy stepping up the production if I can.

Do you have a specific impression of San Antonio?

I’ve only been to San Antonio once. I didn’t really get out and around that much when I was there. The people I met after my shows seemed really nice. Y’all got a good basketball team, and that’s the only major sport [there] so you guys are really passionate about that.

Well now I have to ask you about the NBA Finals. [Live from Chicago contains a bit about betting against the Spurs.]

I was hoping it would go six games at least. I just got to Miami and was supposed to be covering Game 6 (for ESPN’s SportsNation) but there is no Game 6 so now I’m just covering sad Miami fans. I’m going to walk around Miami filming in a Kawhi Leonard jersey, see how that goes. The Spurs played really good basketball, they’re real efficient, they killed the Heat so it was fun to watch. They’re too good. They beat them in five, which I don’t even think they expected to win in five.

I keep reading you’re working on a pilot with Comedy Central. How’s that going?

It’s going all right, just going to see what happens with it. I don’t really want to talk about the pilot.

What about Broad City?

We start season two in a couple weeks. … The show has really connected with younger people. I get recognized a lot and some people don’t even know I do stand-up. Some of them don’t even know my name, they just go, “You!” It’s really funny. They don’t know who I am; they just know my face. … I get to learn how to act, you know, ’cause I’m still really new at acting so I’m getting to learn on the job so that’s really cool.

You’ve gone from talking about saving pickle juice to having Scarlett Johansson as a fan in just a few years. Is there a secret to making success funny?

I just really talk about what’s going on in my life. So that’s just what is happening at that particular time in my life. I actually still save pickle juice, so that hasn’t changed. I use it for pickle back when I want a pickle-back shot.