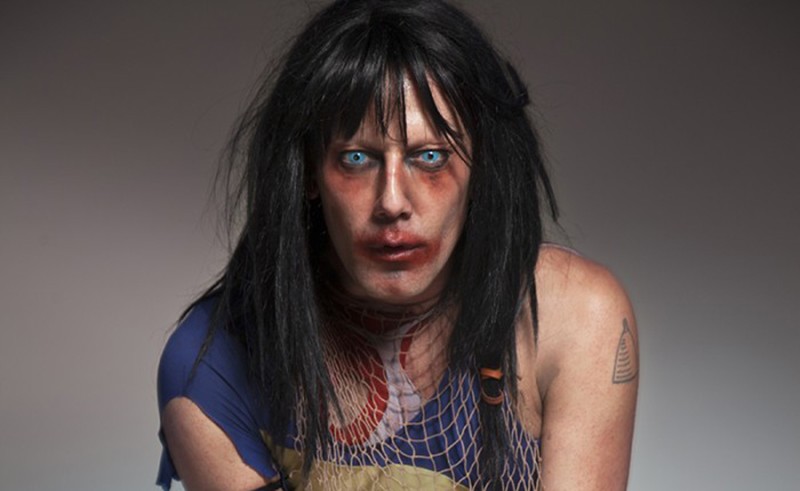 Paul Soileau is the man behind CHRISTEENE — the foul-mouth, over-sexed, self-designated "drag terrorist" that has been making her way around the world since 2010. With songs titles such as "Tears from my Pussy" and "African Mayonnaise," CHRISTEENE has gained an international and diverse fan base. She can be repulsive, yet endearing in many ways; she is Soileau's twisted response to celebrity, pop culture and a whole lot more. The San Antonio Current caught up with Soileau over the phone from his home in Austin while prepping for a European tour.

You'll be performing at the Paper Tiger on August 1. Why did you choose to play at this sort of venue?

The music that we do in a live show — the performance that we give — is very different than the image that you watch in the CHRISTEENE videos. It's very aggressive; it's much more punk. So those venues are fantastic because it just allows this really great crossover crowd to be in the same room and really tear it up together. And the people who come to our shows are a pretty broad demographic of people, so we don't really perform for one group or type of person. The rooms are very mixed, so those old shitty rock and punk clubs are the best places to bring a bunch of different kinds of people and just shove them in there and feed them. And there is just a good energy in those places to tap into.

You opened up for the band Faith No More earlier this year. How was that?

It was really great. I met the keyboardist, Roddy Bottum, about two years ago and we've been pretty close and hanging out and stuff. It just happened that they were touring and Roddy and I got to talking and they let us support them for their first three shows. So we did Vancouver, Seattle and Portland. It was great. Some guys [in the audience] didn't like it, but some guys loved it. But Faith No More is known for serving up some fucked-up shit. It was reassuring for the band to see that people still enjoyed their work. So it gave them hope that their fans were still fucked up.

You have a pretty provocative live show. Do you ever worry that some of the more provocative elements may detract from the quality of the performance or message behind CHRISTEENE?

Do you ever draw the line anywhere and say "That's going too far?"

No. I don't really think of it that way. I mean I don't have rules and regulations. I just do what my gut tells me to do and do what feels right to fit the show or to fit the music. In other words, like when we design the videos — the videos are designed just based off of what the song means and what the song feels like. [The song] "Bustin' Brown" is about ass and assholes. So we built a twenty-foot long asshole and we hopped inside of it. That's kind of how it goes.

So, I read somewhere that CHRISTEENE was partially inspired by Janet Jackson. Is that correct?

No! People sometimes talk about when you meet the character CHRISTEENE — she is kind of quiet, kind, sweet and vulnerable. The Jacksons probably got thrown in there because they are quite ferocious on stage and when you meet them, they are actually very quiet and very timid. I really admire that quality and I'm really attracted to that about performers. CHRISTEENE created herself in that way as well, but there is no influence from the Jacksons other than their demeanor on and off stage.

What's your ultimate vision for CHRISTEENE in the coming months?

Well, we are touring right now. My biggest thing right now is: I have a lot of songs in my head. They're different and I really enjoy them. So I envision myself shitting these songs out and having them sound the best they can. In the meantime, we'll be touring overseas and then we'll come back home and tour in the states. I'd like to get around more in the United States. I've been overseas a lot, but CHRISTEENE was definitely grown from the dirt of the United States, so I'd like to bring her back home and have some fun. So: new music, new experiences, maybe some new hair.

What's been the most rewarding experience so far?

Really, just touring and meeting people at the shows. That's the best shit in the world because it's live — being up on stage, me and the dancers and everybody and just connecting with the crowds. I mean, the crowds are really mixed and hungry and we're hungry. So it's a really great time and there are really great conversations going on after the shows. So that really is the most rewarding: when the work finally gets served out to the public and you get a really strong response. It's just a really great feeling to have those conversations when it's all said and done.

This event has been postponed.