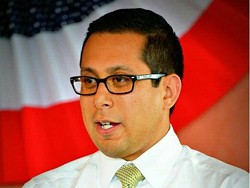 What did you learn from serving on city council that you can take with you to the Legislature?

First of all, that, at the end of the day everything we do needs to be about people. Every decision we make or every proposal that’s put forward has a real human element. You have to always think about people, and it’s very easy to think about the city as its own unique entity that operates automatically, but the truth is that it’s not running on its own steam, it’s running on the people: workers, families, parents, students.

Clearly, there always has to be someone who’s willing to stick up for the most vulnerable or the least powerful among us. That’s our job. The powerful and the connected can expend a lot of resources to be heard, it’s not like those people are up to no good all the time. You have to make sure that you’re listening equally to everyone else who make up the majority of the city and sometimes they need to be stood up for, sometimes you’ve got to take a stand on their behalf.

I believe that, for better or worse, I didn’t put a tremendous premium on getting along, I just wanted to do the right thing. Now, I’m sure I need to soften up a little bit in the way that I deal with people, but I don’t apologize at all for the principles. There was a moment where there were a group of people who were trying to recall me, they were trying to get me out of office, and at first I was very taken aback. It shook me for a minute, but then I realized that the very worst thing that could happen was that I would be out of the (council) seat. But otherwise my life would be OK, and if losing my council seat was the highest cost that I would pay for doing the right thing, I could live with that. Now I say, bring it on. Let’s do it. I’m here for people and that’s what all this is about.

We have some work to do on the state level: public education, transportation and health care to name a few. How do you plan to work with colleagues to solve some of our state’s most pressing challenges?

I believe it really helps to come from a nonpartisan environment. All the work we did was issue-based. Anyone who says they’re willing to work across the aisle, that’s not special. if you’re a Democrat in a heavily-controlled Republican Legislature you have to work across the aisle. I’ve done that. There are going to be disagreements and we’re going to have to take our respective positions...policy issue by policy issue, there’s always opportunity to find some middle ground and build on that. If you take it an issue at a time, you get as close as you can get to real consensus and real collaboration. If we treat each other like gang members with separate colors, it’s all just theater, and that I’ve certainly had enough of.

C: What differentiates you from your opponent?

The opponents I know of now are good people, I have nothing bad to say about them. I can only speak for myself, and that is, I’ve dedicated my career to helping people. I’ve spent my life engaging with the issues that we’re going to engage in in Austin—public school finance, bilingual ed, predatory lending, equal rights, small business assistance and development. I’ve done these things, I know that these are the issues that are important to people because they touch people’s lives. That’s why the Legislature is a good fit. Serving people is not an opportunity; it’s a responsibility.