OK, all of Queen’s 15 studio albums are out. The first batch has already been reviewed by Ashley Feinberg, and I finally finished going through box #2. Box #3 (which includes the band’s last five albums) is out, but I need a few more weeks digging into it. For the time being, here’s my take on the remastered versions of News of the World, Jazz, The Game, Flash Gordon, and Hot Space. 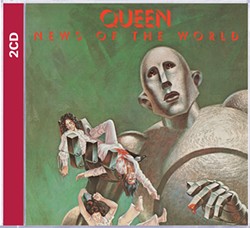 ****1/2 News of the World (1977) This is the album that contains “We Will Rock You” and “We Are The Champions,” enough reasons to consider it a classic. But it also includes “Sheer Heart Attack,” in case you forgot (after “Bohemian Rhapsody”) that Queen could rock. This is Queen still fully embracing its early years, but giving hints of what was to come especially in The Game. Bonus tracks: “Feelings Feelings,” a Brian May rocker that’s finally released now, after years of speculation. Not even the surviving band members agree on the origins of the song, but this version was recorded in London in 1977; from the Oct. 1977 BBC sessions come a heavier and longer version of “Spread Your Wings” (closer to the way the band played it live), and an almost dead-on take on “My Melancholy Blues”; also never-before-released: “Sheer Heart Attack,” originally included in News of the World but also the name of Queen’s third album, has a terrific version taken from a Paris concert during the band’s 1979 European tour; finally, a faster, rocking version of “We Will Rock You,” which Queen usually opened its shows with, is included here from a Tokyo concert in Nov. ’82.

****1/2 Jazz (1978) This is where Queen really starts experimenting, right off the bat. The Middle East-flavored “Mustapha” opens the album, it is followed by the incredible harmonies of “Fat Bottomed Girls,” and continues with a perfect ballad (“Jealousy”), before switching gears again with “Bicycle Race,” perhaps the most ridiculously unpredictable single ever. This album is so nuts, most critics hated it at first. But time proved Queen right. Again. Bonus tracks: The shorter, single version of “Fat Bottomed Girls” is almost identical as the album version, but you’ll notice, for example (among other tricks), that after the a capella intro the guitar enters much faster than in the album version; the instrumental tracks of “Bicycle Race” allow you to hear all the stuff that was there in the first place (but you were too absorbed in the song’s uncensored video to notice); an alternate version of “Don’t Stop Me Now” has the extra guitars and piano that were in the original multi-track (the final version included in the album is better, but this one still rocks); a restored version of “Let Me Entertain You,” first played live in Canada in 1981 and released as a video concert in 1984 and Blu-ray in 2007 (Queen Rock Montreal); and Mercury is sensational in a unique, rare studio rehearsal of “Dreamer’s Ball” with May and Taylor.

***** The Game (1980) This is the perfect Queen album. Period. It amazes me how underrated it is, given its commercial and reasonably good critical reviews. But I will argue until the day I die that not only is this Queen’s most complete album, but one of the most successful combinations of deliberate pop with gutsy edge. Even Michael Jackson, of all people, suggested to Freddie Mercury that “Another One Bites the Dust” be released as a single, and Jacko was so right. Play it loud, and play it non-stop. Bonus tracks: From Montreal ’81, a version of “Save Me” with May starting on piano and Mercury then taking over the keys for the second chorus; “A Human Body,” the B-side to “Play the Game,” with Taylor on vocals, drums, and guitar, and backing vocals by all except Deacon; an early version of May’s “Sail Away Sweet Sister” with May’s guide vocal and the unusual live recording of four instruments at once (they usually did early tapes with guitar, bass, and drums, or piano, bass, and drums); “It’s a Beautiful Day,” included in Queen’s last studio album (1995’s Made In Heaven) actually took birth as a song during this April, 1980 The Game sessions; “Dragon Attack,” one of the heavyweights from The Game, is included here with a rousing version mixed with a bit from “Now I’m Here” (from 1974’s Sheer Heart Attack) recorded live in the UK in 1982.

*** Flash Gordon (1981) Honestly, this album only works for me if I’m watching the movie. Mostly a Brian May solo project, he did pull off a decent soundtrack, but this is the least Queen of all Queen albums. Enter at your own risk. Bonus tracks: The shorter, single version of “Flash’s Theme,” which includes more dialogue taken from the movie; a shorter version of “The Hero” with Mercury’s double-track vocal; early, linked versions of “The Kiss” and “Football Fight” (separated in the final album), the latter with the original piano melody, replaced by synths in the final production; and live versions of “Flash’s Theme” and “The Hero” taken from the 1981 Montreal shows, with May playing both keyboards and guitar on “Flash,” even though you can barely hear the strings in the beginning.

*** Hot Space (1982) When this album came out, I felt as if my long-time girlfriend had cheated on me with my best friend. I hated it. I still do, but not nearly as much as in ’82. It sounds great and I surprisingly found a few gems I ignored at the time, but don’t ask me to pinpoint which ones: I don’t want to touch this album again. Ever. Bonus tracks: Ironically, the bonus tracks for what I consider Queen’s worst album are, for the most part, juicier than the album versions. “Staying Power” absolutely rocks in this London concert from 1982, with less synths and more guitars; “Soul Brother,” which was the B-side to “Under Pressure,” is one of Queen’s most gorgeous blues songs ever; “Back Chat” (the last single from the album) gets sort of a remix by Deacon, but you need to be Deacon to know the difference; and the live versions of Taylor’s “Action This Day” and “Calling All Girls,” recorded in Japan, are rawer and better than the originals (“Action,” by the way, was left out from 1982’s Live in Japan video, and this is the first time the song is heard in 30 years).