Queens of the Stone Age on ‘…Like Clockwork’ and the Grammys 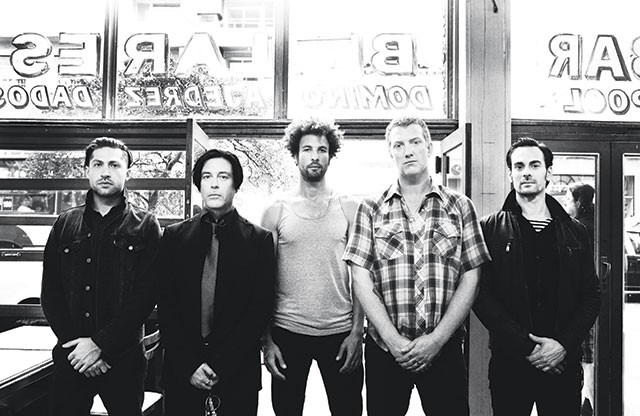 Last March, after six damn years of waiting for a new Queens of the Stone Age album, die-hard fans finally got word that one would arrive in June. When it finally dropped, it did not disappoint.

Said album, ...Like Clockwork, is as frisky as it is ambitious and as silky as it is sharp. It is, at once, a departure from and a reaffirmation of the loose but distinct identity of Josh Homme’s ever-morphing stoner rock project. It’s a tremendous album that sees the band shift focus from building songs around driving guitar parts to building songs around Homme’s adaptable falsetto and the album’s deeply personal lyrics.

The album helped the group nab a Grammy Awards slot performing alongside Nine Inch Nails, Dave Grohl and Lindsey Buckingham in an abbreviated performance Rolling Stone termed “gloriously weird.” QOTSA was also up for three Grammies, including Best Rock Album and Best Rock Performance for the devastating wailer “My God Is The Sun”—and that’s not even the best song on the album. The wispy, toe-tapping sway of “The Vampyre of Time and Memory” turns breathless when disrupted near the end by a barbed-wire guitar solo, cutting jagged into the carefully conceived reverie. “Smooth Sailing,” with its frantic guitar ascents and descents, jars the listener and taps into our natural exhilaration caused by roller coaster riffs. Not that anyone needed this album or this song as proof, but Homme is a master of rock guitar, packing so much movement into one song that it almost gives off the illusion of stasis, like some daydream of stillness while the world still teems and seethes. The album’s titular track, a gorgeous ballad driven by a loose piano refrain and Homme’s silkiest vocals to date, showcases the success of the band’s altered approach to composition as well as anything on the LP. From start to finish, ...Like Clockwork is easily one of Queens of the Stone Age’s best works.

You’ll have a chance to catch them live at the Majestic next Monday. If the lavish downtown theater seems like an interesting choice for such a heavy rock band, I hear you. In order to find out the reason for the venue choice, among other things, the Current caught up over the phone with QOTSA bassist/multi-instrumentalist Michael Shuman (aka Mikey Shoes, who joined the band in 2007) just days ahead of the group’s Grammy performance. Here are some of the highlights of that conversation.

On the differences between Clockwork and other QOTSA material: “There are really two main differences,” said Shuman, speaking from LA. “For one, the focus is more on vocals and lyrics. It’s a vocal-driven record rather than guitar-driven. The guitar sound is also much cleaner rather than just heavy. Also, we worked for months with a new engineer.” Shuman said that this new engineer, Mark Rankin, had a great deal to do with the tweaks in the band’s sound on ...Like Clockwork. Overall, for Shuman, the resulting album is unique because it is “more vulnerable sonically and lyrically.”

On the smaller, more intimate venues for this tour: “Well, we get a choice when we’re headlining. We love playing really beautiful old theaters that just feel good to be in, as opposed to the sterile nature of arenas. It’s more intimate, more magical.” Shuman also agreed that “the new material may resonate better in a theater setting.” But, even though the live set list—which the band changes every night—will certainly be built around ...Like Clockwork, Shuman indicated that this performance would be a discography-spanning affair. Good news for all you 30-somethings, like me, who can’t let go of Songs for the Deaf.

On the Grammy Awards: “Josh is friendly with the producers of the show and since we [were] nominated, the idea of us closing out the show came up. We’re doing a co-headlining tour with Nine Inch Nails in Australia, so that just made sense. We [were] honored to be a part of the show.” After remarking that the gramophones aren’t even given out on the telecast and that rock hasn’t had much of a place in the show in general, Shuman still gushed, “I mean, we’re honored. And glad that [The Recording Academy made] rock ‘n’ roll such a part of the show.” Us too, Mikey Shoes. Us too.

Necessary footnote: Make sure you get your ass to the Majestic early for the exquisite death-folk stylings of Chelsea Wolfe.