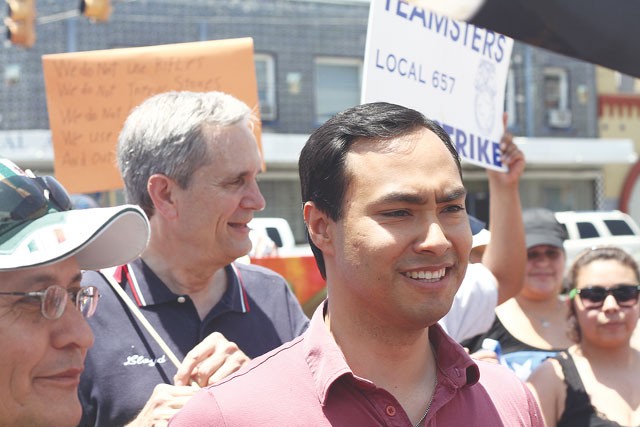 Republican redistricting pushed Austin-based Congressmen Lloyd Doggett into a linear Congressional district — at least temporarily — stretching from Austin to San Antonio. And though he claims he has yet to start officially campaigning, we’re already seeing more Doggett around town.

He joined a long, blistering July Fourth march with a host of folks protesting the rise of anti-immigrant sentiment on display in Austin and D.C. Before a trek through the city’s Westside, Doggett, flanked by local reps with the Mexican American Legal Defense and Education Fund and the Brown Berets of Texas, praised the crowd of roughly 200. “Thank you for your leadership. I’m pleased to be your long-term partner.”

Sound like campaigning talk to you? It did to state Rep. Joaquin Castro, San Antonio’s own political wunderkind now pitted against the veteran politician for the new congressional seat. When Castro joined the crowd moments before the march, he greeted Doggett and laughed, “I thought you weren’t campaigning.” Asked later if he found Doggett’s San Antonio presence irritating, Castro brushed it off with a smile, saying, “Nah, this is a campaign. This is how it works.”

Castro acknowledged Doggett’s long-time liberal presence in Congress, saying, “[Doggett] has of course made an impression on people, and if this is a longevity contest, I’m gonna lose.” Still, he added, “I think here, in San Antonio, we’re more about looking toward our future, not our past.”

Doggett has been forced to dive into San Antonio politics by a newly drawn GOP-inspired map that turns his current District 25 into largely conservative turf, practically unwinnable for the liberal Austin congressman. Doggett has slammed the new map, saying it’s unconstitutional and unlikely to stand up to legal scrutiny. Still, Doggett says, he’ll run in the new district if the courts don’t intervene.

For Doggett, this is the second time Texas Republicans have tried to squeeze him out. In 2003, under the infamous redistricting plan led by now-convicted felon and former U.S. House Majority Leader Tom DeLay, the GOP forced Doggett into a new district by making his old one largely conservative and impossible to win.

Castro spoke of his grandmother, a Mexican immigrant, who worked as a babysitter, cook, and maid on the city’s Westside for 40 years. “She worked as an immigrant … I don’t know whether she was legal or illegal, but she did everything that she could to help us live the American dream.”

State Sen. Jeff Wentworth has picked a bizarre new fight, paying the Express-News to run pricey (campaign-funded) advertisements that slam the newspaper for printing columns he disagrees with.

What sparked the war of words? A column by state Sen. Leticia Van de Putte printed by the E-N last month criticizing Gov. Perry and his brood for pushing an “anti-Hispanic agenda” in the Lege with controversial immigration policies, Wentworth said. Wentworth and eight Republican colleagues fought back, accusing Van de Putte of “race-baiting” in a lengthy ad, “paid for by Friends of Jeff Wentworth.”

What has now incensed Wentworth are a trio of columns by O. Ricardo Pimentel, Victor Landa, and E-N Editor Bob Rivard, each disparaging GOP efforts to pass controversial but now-dead immigration measures, along with a couple jabs at the state’s new GOP-friendly congressional map.

“They edit things and take out comments. I didn’t want them to do that to me,” Wentworth told QueQue Tuesday morning, while continuing to call the recent anti-sanctuary cities measures a “common sense” approach to keep Texas families safe.

Still, the irony of paying the enemy to punish the enemy isn’t lost on Wentworth — he wrote in his second ad, which ran Sunday: “[I]f you’re a Republican and criticize race-baiting, and decry conduct that encourages racial strife (and pay the paper $8,932 for the privilege so that your side of the story can be truthfully told), you are attacked in print by three newspaper columnists.”

The paper defended itself Monday with a short story chronicling the spat and by quoting Rivard and editorial page editor Bruce Davidson. “I’ll stand by my recent column, in which I noted that Sen. Wentworth from time to time places these unusual advertisements in the Express-News. This is one of those times,” Rivard told his own newspaper.

In all, Wentworth said he has spent roughly $18,000 defending himself in the daily, or rather, “Friends of Jeff Wentworth” have. Bad news for the Express: his last ad claims he’s about out of cash. Too bad. We were about to start belittling the man for cash, too.

In late June U.S. Immigration and Customs Enforcement director John Morton sent out an agency-wide memo outlining ICE’s priorities regarding which immigrants agents should focus on detaining and deporting. But unlike previous directives, Morton laid out over a dozen factors agents should keep in mind that might merit softer treatment, including taking into account if an immigrant has children who are U.S. citizens or was brought to the U.S. by parents as a young child.

Texas Republican Congressman Lamar Smith was apparently so roused by the new guidelines that he has announced plans to file legislation that would freeze ICE’s power to defer deportations in certain cases. In a letter he circulated around the House, Smith, who chairs the House Judiciary Committee, said his new law would prevent the Obama administration’s efforts to clandestinely “legalize millions of illegal immigrants.”

The bill, which Smith dubbed the Hinder the Administration’s Legalization Temptation (HALT) Act, would essentially take away any prosecutorial discretion from ICE. And the bill would only apply to the Obama administration. Thankfully, even if Smith manages to squeeze this mess out of the House, it would probably die a quick and easy death in the Senate.

Yet the national union for ICE agents also spoke out against Morton’s new priorities. In a prepared statement, union leaders said they’d issued a unanimous vote of no confidence in Morton, criticizing what they called “efforts within ICE to create backdoor amnesty through agency policy.”

Despite numerous attempts, QueQue couldn’t get a response from Smith’s office. We couldn’t wait to hear his take on what great misery was created the last time the Obama administration approved temporary protected status — to stave off the deportation of Haitian immigrants who fled to the U.S. in the aftermath of the country’s devastating 2010 earthquake. •