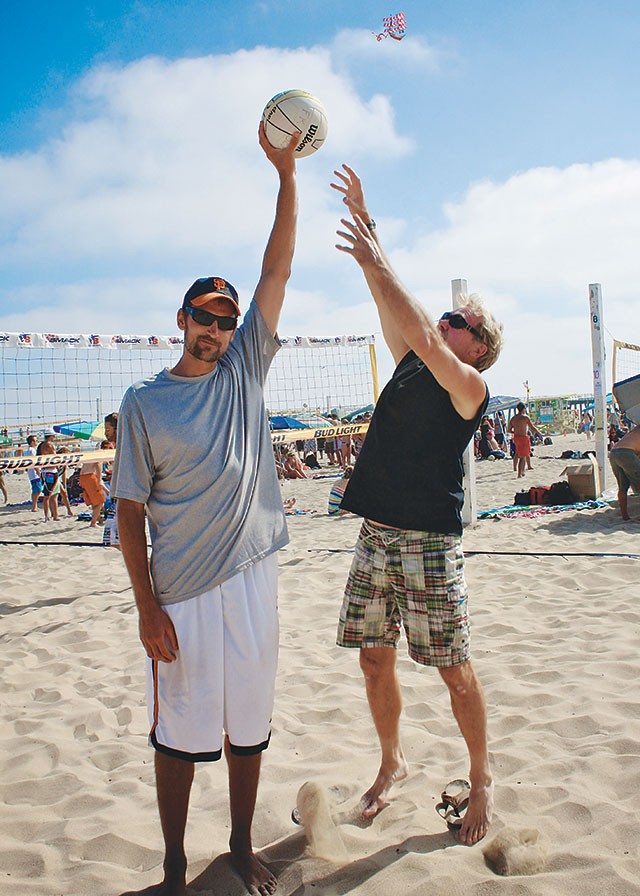 Just how cool is Brent Barry? He helped the San Antonio Spurs win NBA Championships in 2005 and 2007. He currently ranks 13th in career three-point field goals made, shooting over 40 percent from outside the arc. Barry won the NBA Slam Dunk contest in 1996 (wearing his warm-ups!) by taking off from the free-throw line to sail in and dunk one-handed. He surfs. He plays the guitar. He plays beach volleyball. He does magic tricks. He deejays a sick play list. His friend Eddie Vedder dedicates the song “Supersonic” to Brent onstage during Pearl Jam concerts. On top of all that, he’s a very funny guy. He’s currently working as a sports commentator and studio host for the NBA TV show NBA Gametime. — Gary Sweeney

1. If there was one thing you could point out to the average basketball viewer that would make them enjoy the game more, what would it be?

Good one. What about, uh, understanding strategy?

I would say, pay attention to how the team with the lead handles the clock.

2. Let’s say there are two teams: one team is packed with talent but with an average coach, the other team has average talent but with a brilliant coach. They play 100 games against each other, what’s the outcome?

My opinion? The team with the talented players will win 70 games.

3. What’s the weirdest piece of trash talk anyone has directed at you?

Bonzi Wells once called me an “Uncle John.” I think I knew what he meant. I think.

Brian “The Custodian” Cardinal. Daron “Mookie” Blaylock. Brian “The White Mamba” Scalabrine — but I prefer “The Human Victory Cigar,” in reference to when he checked in for the Celtics it was like the flesh form of the great Red Auerbach’s classic move of lighting a cigar when the Celtics’ victory was well in hand: Brian in = game over. Jerry “Mr. Clutch” West, which has now morphed into “The Logo” since it is he who is silhouetted on the NBA trademark logo. And of course, my all time favorite, “Pistol” Pete Maravich.

5. Would you give 10 years of your life to be able to surf like (World Champion surfer) Kelly Slater?

The Michael Jordan of surfing? He is amazing but I find surfing to be very much a personal recreation; it represents a lot of things to me and the ocean has always captivated me. I would not give up that kind of time with friends and family to frolic in the water…

6. Where’d you get your sense of humor?

I attribute my humor to three things: my Uncle Alan and Bugs Bunny.

7. I imagine that from the first time you picked up a basketball, you dreamed of winning an NBA Championship. Was it everything you imagined?

Actually the first time I picked up a basketball I probably tried to eat it, I have been around the game my whole life. With a father [Rick Barry, named one of the 50 greatest players in history by the NBA] that had a very storied career and two older brothers and one younger brother [Scooter, Jon, and Drew, all were professional basketball players], and a great coach that is my mom’s father, Bruce Hale, I was sort of hit from all sides with the game. But being around it, I naturally fell in love with playing and exploring my talents and the challenge to see how far it could take me. More importantly, how much I could challenge myself to be diligent in my practice habits and compete with myself and play with a team, all so very educational on many levels. Being part of winning is always special and being part of a championship can be a lot of luck. It is always better to be lucky than good but lucky and good? Awesome.

8. You also won the Slam Dunk competition in 1996. Did you find the individual award more satisfying?

9. Jimmy Connors once said, “I hate to lose more than I love to win.” Does that describe you?

Not really. But the losing seems to stay with you more … that’s what makes winning not only satisfying but inherently fleeting. The best part of it all, and just speaking of my basketball career, is that you have a chance to compete — against yourself at times, against your teammates at times (in practice or earning playing time from your coach), and of course against an opponent. I will never forget Coach Pop’s best advice that very much translates to times in your life when you’re not quite sure what to do: LTMFF (let that motherf****r fly).