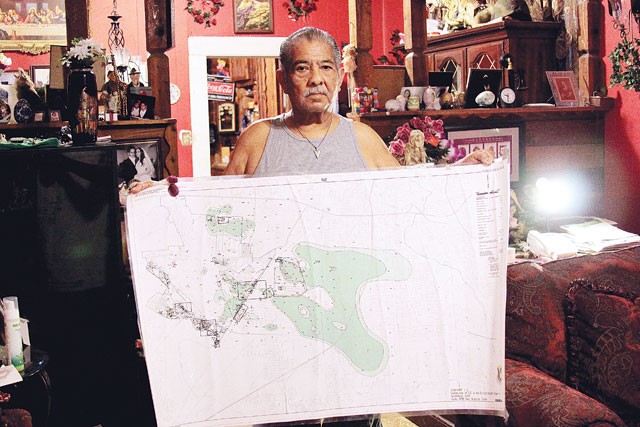 Purple wooden crosses that dot this south San Antonio community are starting to age, their paint chipped and faded. Planted in lawns next to mailboxes, fences, and trees, they point to a battle with cancer for someone inside.

For many here, the crosses are a sign of the lasting, toxic legacy of the now-shuttered Kelly Air Force Base, which last year turned over its last patch of land to the Port San Antonio industrial park. But even as some residents continue to blame the neighborhood’s higher-than-normal rates of cancer and birth defects on chemicals that seeped off base decades ago, the proof is elusive. Kyle Cunningham, program manager at the City’s Public Center for Environmental Health, said last week the agency’s contract with the Air Force to study possible health effects from Kelly contamination, a cooperative agreement struck in 2001, ended last month. All the while, many in the neighborhood are critical that years of studies and reports have failed to answer that one nagging question: whether the Air Force is responsible for the rash of illnesses hammering the neighborhood.

“We’ve felt for a long time the contamination caused our sickness,” says Robert Alvarado, a four-decade veteran of this so-called Toxic Triangle. “But apparently, we’ll never prove it. We’ll be dead and everyone will forget what caused all of this.”

Decades have passed since base officials discovered toxic plumes in the area’s groundwater, once stretching underneath more than 20,000 nearby homes, many of which relied on private water wells. For years, residents of this so-called Toxic Triangle, a residential area on the edge of the former base, have hoped to prove the Air Force culpable, at least in part, for the neighborhood’s health woes, even as studies remained frustratingly inconclusive.

The Air Force started acknowledging decades ago groundwater contamination in and around the base stemming from chemicals like trichloroethylene (TCE), a degreaser, and tetrachloroethylene (PCE), a chemical used to strip paint, that were routinely dumped into open pits. To date, a quarter billion dollars have been spent on cleanup at Kelly, shrinking the plumes and scrubbing the former base, according to the Air Force Real Property Agency, which expects to shell out another $32 million to complete the cleanup, a process that could drag on into at least 2041, according to Air Force estimates.

Alvarado says he and others first suspected something was wrong at Kelly in the 1980s. Neighbors routinely complained of foul odors coming from the Kelly grounds, he said. Some even saw their fingernails turn black when they watered their lawns. Many of the neighborhood’s shallow groundwater wells that have since been plugged as a precaution were used for drinking, washing cars, and watering gardens.

Base officials began to take note in the late 1980s when construction workers digging along Quintana Road unearthed toxic fumes and collapsed. Officials later admitted that workers drained chemical waste for years directly into the ground, or dumped it into nearby the nearby creek. In addition to TCE and PCE, Kelly workers also handled and dumped dangerous toxins like dichloroethene (DCE), benzene, vinyl chloride and thallium, known and suspected cancer-causing agents.

Like many in his neighborhood, cancer surrounds Alvarado. His wife Lupe was diagnosed with thyroid cancer years ago, and soon afterward his daughter developed the same condition, though neither he nor his wife had a prior family history of the disease. At least six neighbors on his block have succumbed to cancer over the past two years. “Right down the street, my neighbor passed away this Saturday. His wife passed away about two years ago,” he said. “Both were because of cancer.” An aneurysm robbed Alvarado of most of his sight years back, and doctors later discovered his kidneys were badly damaged from unknown chemicals.

Numerous reports over the years show there is, indeed, something wrong inside the Toxic Triangle. But each stop short of identifying a cause for the elevated cancer rates, as well as higher-than-normal birth abnormalities, such as Down syndrome and infant lung defects. Officially, a clear pathway to chemical exposure hasn’t been proven, something Alvarado and others in the neighborhood brush off with sighs and eye-rolls. They lived with the wells, along with flooding runoff from Kelly during heavy rains, years before the contamination was even acknowledged. And Alvarado recalls buying two truckloads full of dirt from Kelly at a bargain price to shore up his yard from flooding, something he now regrets, insisting the soil was likely contaminated.

The federal Agency for Toxic Substances and Disease Registry, originally tasked with assessing health problems around Kelly, conducted some of the area’s critical first studies in the 1990s, when authorities had just started to realize the extent of contamination in and around Kelly. Those studies noted increased levels of liver and kidney cancer, as well as leukemia, but failed to connect it to the groundwater plumes emanating from Kelly or possible soil contamination in and around the site.

A Congressional panel would later release a damning report against the ATSDR, accusing the agency of performing a shoddy analysis and citing the agency’s work at Kelly as a prime example of how the ATSDR “often obscures or overlooks potential health hazards, uses inadequate analysis, and fails to zero in on toxic culprits.” One of the chief complaints of report author University of Maryland toxicologist Katherine Squibb, who reviewed the ATSDR’s work after being hired by the Kelly Restoration Advisory Board (RAB), is that the agency failed to measure important possible exposure pathways, and that the agency’s studies hadn’t determined whether chemicals migrated off of the Kelly grounds. In addition, she said, studies looking for sources of exposure to the community only occurred after the Air Force had already ramped up its cleanup efforts.

Greg Gangnuss, a spokesman with the Air Force’s property group, says the Air Force has identified 36 cleanup sites on the base, 25 of which are now finished. The Air Force recently awarded the Tennessee-based Shaw E&I Group, which previously helped plug groundwater wells around the Toxic Triangle, a $37.5 million, nine and a half year contract to identify and remove any chemicals remaining on base.

As the groundwater plumes continue to recede with the ongoing remediation, Alvarado and others in the neighborhood fear their chances of linking local sicknesses to Kelly’s toxic past shrinks.

Diana Lopez, an environmental justice organizer with Southwest Workers Union who grew up in the Toxic Triangle, said that while San Antonio’s Metro Health has largely been responsive to concerns from the community it has often felt like the cadre of local, state, and federal agencies has been looking for ways to explain away the illnesses. “That’s part of what makes it this ongoing struggle, it seems like there’s always excuses,” she said. Case in point: the brief inference out of Metro Health two years back that aflatoxin-contaminated corn, or bad tortillas, might explain away the high cancer and diabetes rates in the neighborhood (“Yea, we were pretty disgusted by that one,” Lopez said).

And while Gangnuss says that there is “no evidence that containers of actual Herbicide Orange were ever maintained at the former East Kelly AFB,” it is true that the chemical components of Agent Orange were stored there.

The Centers for Disease Control last year funded a study testing soil samples from 10 neighborhood homes for the presence of dioxin, a key component of dangerous herbicide. Still, the study by Texas A&M University professor Thomas McDonald found that all possible carcinogens — including dioxins — discovered in the samples were at levels considered acceptable by the U.S. Environmental Protection Agency. After reviewing the report, renowned environmental scientist and activist Wilma Subra, who’s helped residents in the neighborhood since 2001, said dioxin levels in some of the samples surpassed revised benchmarks the EPA plans to rollout in the near future. “I would say they’re still elevated.”

Subra has assisted nearby residents in digesting the mounds of data regarding Kelly, helping consolidate EPA and Texas Commission on Environmental Quality reports, and presenting yearly breakdowns to residents. “There are a whole host of issues here still,” she said by phone last week, “but the big one is that there’s still offsite groundwater contamination.”

The most recent test well data, she said, shows a plume still floats underneath the northern corner of the neighborhood. Recent EPA analysis showed vapor from the toxic plumes had made its way into some neighborhood homes, but not at levels that required action from the agency.

The cleanup, Subra says, is “moving, but it’s still moving very slowly.” There’s still sub-surface contamination the Air Force has yet to address, she insists, claiming some contaminated areas on base were simply capped or covered over with parking lots, leaving open the possibility of chemical leeching in the future. At one of the most contaminated sites on the former base, the old metal plating shop, Subra says officials simply erected cement walls to contain the toxins. “There’s still huge source material there,” she said.

And just look to the Lower Leon Creek to see how Kelly’s toxic legacy is still being felt. Runoff from the base, which flushes into the nearby creek, continues to worry Subra and some in the neighborhood. While a recent U.S. Geological Survey study shows elevated levels of a variety of toxins in virtually all of Bexar County’s watersheds, Leon’s the worst, with hazardous levels of the suspected carcinogen DDT, an herbicide used extensively in the Vietnam War and stored at Kelly, along with harmful concentrations of chromium and cadmium.

Once TCEQ and the EPA deems the cleanup has been finished, the Air Force will forever wash its hands of the Toxic Triangle, able to walk away from its environmental liability. For Subra, she’s not sure a cause and effect will ever be definitively proven, even though, according to her, the chemicals dumped at Kelly wholly match illnesses shown in the neighborhood.

“It’s very difficult to do cause and effect, even in a legal setting, in court,” she said. “But the health impacts match. What they have is what’s associated with the chemicals they’ve all been exposed to.” •

1917
Kelly Field opens as a military pilot training base.

1948
With the creation of the U.S. Air Force, field is renamed to Kelly AFB.

1971-1974
Drums of herbicide used in Southeast Asia, including the chemical components of Agent Orange, were stored at Kelly, military officials later confirm.

1982
Air Force begins to investigate nature and extent of contamination on and around the base.

1994
Kelly Restoration Advisory Board formed as a bridge between community, the military, and local, state, and federal regulatory agencies.

1995
Base Closure and Realignment Commission (BRAC) votes to close Kelly.

1999
About 400 residents sue the federal government, claiming groundwater contamination amounted to the “taking of private property without just compensation.” Health complaints are not mentioned.