Race, Class And Politics In HBO’s ‘Show Me A Hero’ 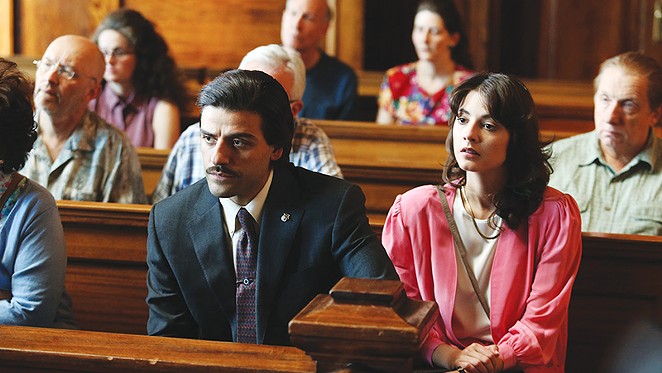 Exhausted from fighting tooth and nail to comply with a federal court order to approve sites for 200 public housing units to be added to white, affluent parts of Yonkers, New York, Mayor Nick Wasicsko (Oscar Isaac) meets with lawyers, council members and U.S. District Judge Leonard Sand (Bob Balaban). Facing re-election as a first-term mayor and fearing for his political life, an overburdened Wasicsko begs Sand to shoulder some responsibility.

“Justice is not about popularity,” Sand remarks. “No. It’s not,” rebuts Wasicsko. “But politics is.”

Tackling events from 1988 to 1993, the six-part HBO miniseries Show Me a Hero delves into a housing issue that nearly drove Yonkers apart. With all public housing in one area, Yonkers is determined to be unlawfully segregated. As the issue is argued, 28-year-old Wasicsko has a meteoric rise, becoming the youngest Mayor of a big city. Meanwhile, the white citizens of Yonkers grow angrier and the city shows a refusal to comply. Sanctions looming and cornered, Wasicsko is put in a position to potentially ruin his political career by going against the vocal, increasingly aggressive citizens or running Yonkers into the ground.

The show is at its peak when it unveils the underbelly of the political system, especially in scenes involving closed-door meetings and strong-arming. It’s captivating to watch the harsh reality of re-election driven politics, as many politicians debate complying, enraging their constituents and putting themselves in danger of sinking their political careers by losing potential voters. Displaying natural charisma and strong, subtle comedic timing, Isaac deftly embodies a politician and is particularly great at playing exasperated, showing a fiery demeanor and dry wit.

Of course, it isn’t merely an economic issue, but rather one driven by fear, or in some cases outward racism, as racial epithets and offensive graffiti are seen throughout the series. Intertwined into the narrative are perspectives from families that are directly affected by housing problems. Unfortunately, none of these stories are emotionally impactful nor are they satisfying to follow over six hours.

Collectively, Show Me a Hero feels a little front-loaded. Its earlier episodes, which brilliantly capture the inner workings of a very tense political situation, provide the best entertainment and storytelling of the miniseries. The back half, however, looks more at the cultural and racial side of things and while it shines a necessary unflattering light on the ugliness of the issue, it loses some fire and could stand to be more unflinching. Nonetheless, Show Me a Hero is strong, well-acted sociopolitical material and given many events this year alone, still entirely relevant.

The first episode of Show Me a Hero premieres August 16 on HBO.