Radiohead's "From the Basement" special, this Saturday on Palladia 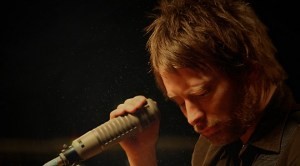 Check your local listings for times, but you are warned: Radiohead's intimate live-in-studio performance Radiohead: The King of Limbs--From The Basement, filmed for BBC Television, will premiere this Saturday on Palladia and seven days later it will re-run on MTV2. No host, no audience: just Radiohead performing The King Of Limbs material for the first time on U.S. television, as well as new non-album tracks and exclusive raw behind-the-scenes footage.

The show premiers Saturday, July 23 at 9pm Eastern on Palladia with an encore on MTV2 on Saturday, July 30 at 3am Eastern. Again, check local listings to make sure you don't miss it. For more information, visit palladia.tv.

Here's "Staircase," a new Radiohead song from the show.