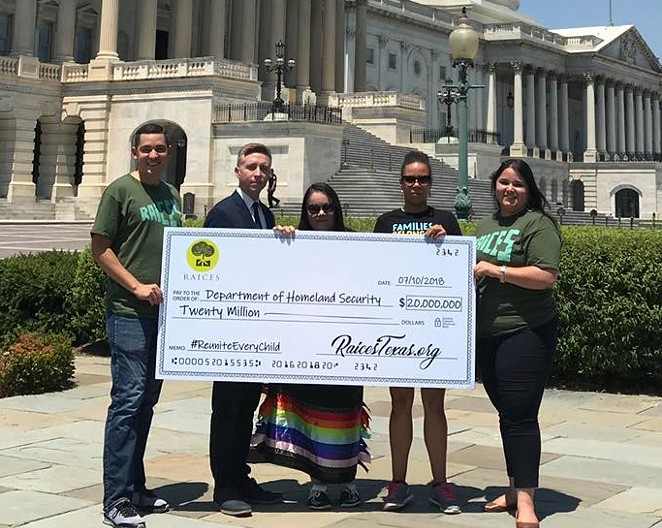 Talk about putting your money where your mouth is.

San Antonio-based refugee assistance group RAICES, flush with $20 million in donations from a Facebook fundraiser that went viral, has offered to post the bonds of all immigrant women separated from their kids by the Trump administration's "zero tolerance" policy.

The group went to the White House Tuesday with a cardboard facsimile of a $20 million check to bail out more than 2,000 women in detention under the Trump immigration policy. According to RAICES's Facebook post on the incident, secret service agents "shut down" their effort and "pushed us off the street and ultimately out of Lafayette Park."

"As a mother I cannot imagine the heartbreak that comes with having my children torn from me and put into an internment camp," RAICES spokeswoman Jennifer Falcon said via Facebook.

Immigration bonds run an average of $10,000, creating new hardship for asylum seekers already struggling to figure out the complicated legal process for their cases, according to the group. RAICES said its bail offer is meant to speed the reunification of asylum-seeking parents with their children.

On Monday, a federal judge slapped down the Trump administration's effort to keep immigrant families in long-term facilities, calling it a "cynical attempt" to undo a longstanding court settlement that doesn't permit the government to keep children in detention longer than 20 days.