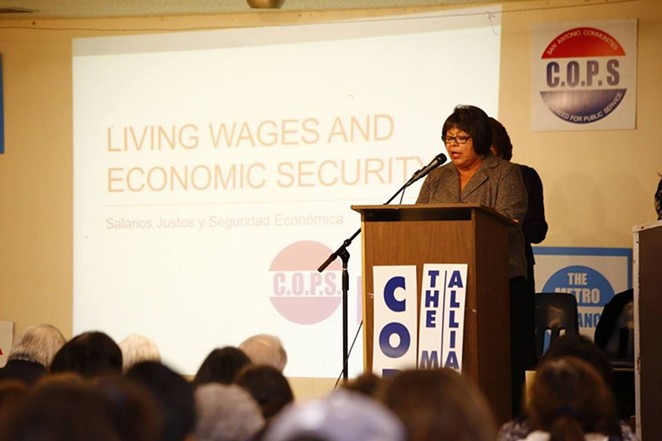 What's the one issue that church and government can agree on? Well, for San Antonio the common ground rests on the matter of minimum wage.

Communities Organized for Public Service (COPS) and the Metro Alliance, along with Bexar County Judge Nelson Wolff, County Commissioners Paul Elizondo and Tommy Calvert all come together today in support of a campaign to increase wages for the lowest paid county and city employees and subcontracted workers.

Next year, the county and city employees are expected to see a minimum of $13 an hour and the campaign hopes to reach $15 within the next three years.

Robert Cruz of St. Leo the Great Catholic Church states in a press release, “We launched the Living Wage campaign because 1 out of 5 people in San Antonio live in poverty; for children, it is 1 out of 3. That’s deplorable!”

These unusual allies expect the next mayor to act on such issues and have worked to increase voter turnout for the run-off election for mayor on the West Side and South Sides, especially in areas with high poverty rates.

Cruz agrees strongly, saying “We’re in the midst of a mayoral race, and critical issues such as wages, job training and affordable housing have been clouded by negative stories and attack ads. We remind residents to vote because the next mayor and council will decide on these issues.”