January 08, 2014
comment
To better understand the Serbian moonshine that is rakia (read Ron Bechtol's story on the new Dor?ol Distilling Company in this week's issue) I stopped by the boutique craft distillery on South Flores to learn more. Bartender Nick Kenna, who's in charge of the bar at Dor?ol, mixed a number of drinks ranging from easy to mildly difficult to demonstrate what home bartenders can whip up using a $60 bottle of the apricot rakia or Kinsman. If all else fails, visit Kenna at the bar's distillery at 1902 S. Flores. Bar/tasting hours:5pm-midnight Thu-Fri; 5pm-1am Sat. The first cocktail is a take on the French 75 (made with gin or brandy). 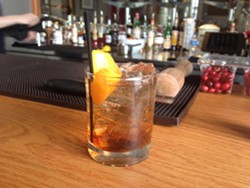 Rakia subs in for bourbon whiskey. The second cocktail, the favorite so far at the bar, is a riff on an bourbon-based classic. Old Fashioned 1/4 ounce anise-infused brown sugar 3 dashes bitters of choice Splash of water 1 1/2 ounces rakia In Old Fashioned glass, muddle sugar, bitters and water. Add rakia, ice and stir. The third, my personal favorite, was Kenna's take on a hot toddy. He adds whole leaf cardamom/cinnamon tea from Whole Foods in place of water.