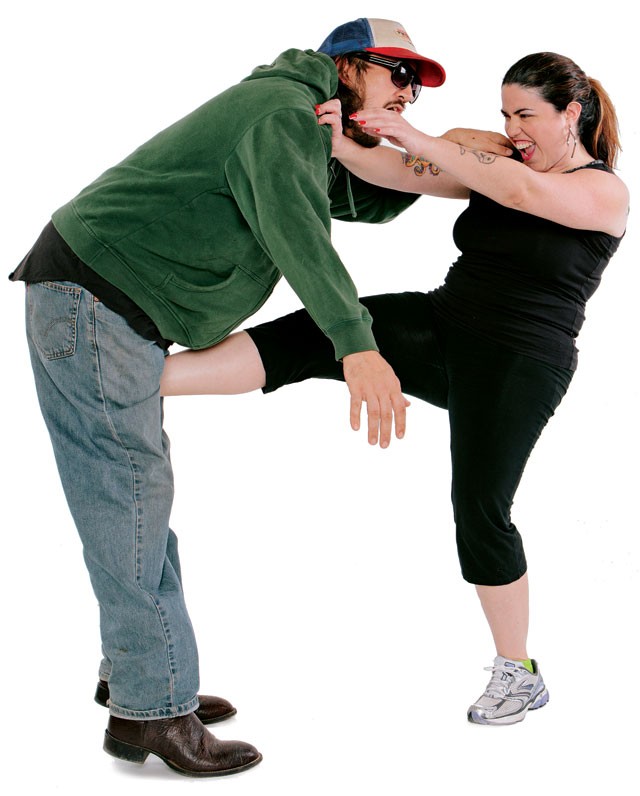 "You'll leave today with bruises, scratches, nauseated..." The notice made me second-guess my warm and fuzzy feelings of women's empowerment at a recent self-defense seminar at STW Krav Maga. I literally wanted to run for the door. Pete Hardy, chief instructor for Krav Maga South Central Region with 12 years of combat experience, knows he has to lay it down rough so the women he trains won't fall victim to an attack from a friend or a stranger, getting laid down in the worst way imaginable.

"You have to beat them and beat them, it's your only way out. You can not talk your way out!" I knew I had to stay with the 174 women here and learn whatever these people wanted to teach me — to fully commit to the idea that I can defend myself against an attacker. With all the recent political talk about "forcible" and "legitimate" rape, it's not just a hot media topic. This is a real issue. This is a real threat. Statistically, it's a certainty: you or someone you know will be affected.

Krav Maga is the Hungarian/Israeli-based "contact combat" martial arts method that uses strikes, wrestling, and grappling as self defense in real-world situations. The "Dangerously Cute" seminar I was attending, a fundraiser for The Rape Crisis Center of San Antonio, was celebrating it's 10th year helping both survivors of rape and women concerned with personal safety learn techniques that can literally save lives. The Rape Crisis Center provided crisis advocates and therapists to assist sex-assault survivors overcome by emotion. Lynn Blanco, CEO of The Rape Crisis Center with 37 years of experience with the organization, said she "knows the scenarios are intense. We want our participants to feel safe, both emotionally and physically."

Hardy came up with the idea for a women's-only self-defense seminar and has helped dozens of young girls and women learn to feel safe again, to know what to do if there ever is a next time. "All rape survivors say the same thing: 'I didn't know what to do.' Well today you will know exactly what to do. You will strike him, kick your attacker in the balls, then go home and watch your soap operas like nothing happened." Oh really? This I had to see.

To open the class, three women were attacked by men wearing full riot gear. They were picked up, flung around, pinned to the ground, and came out on top and victorious within seconds. Two teenage girls behind me giggled uncontrollably. I knew they were unsettled by what was expected of us, fending off an attack by a stranger, a possible rapist, someone who could be a good friend or family member. It felt real and yes, it was very uncomfortable. But you have to go through these exercises and this physical pain in a safe environment so you know what to do should an attack come.

After warming up and learning some techniques, about two dozen heavily padded men, aka Krav Maga trainers and volunteers, entered the room. One by one, we had to close our eyes and prepare for their attack. This proved to be too scary and intense for some participants who chose not to spar. Some women were picked up from behind and flung to the ground, where they had to fight their attacker until they delivered a "debilitating hit" so they could get up and run away. My adrenaline was off the charts. I did not want to get hurt, but I also do not want to get raped. Ever. It's that simple.

I chose my attacker (imagine that feeling!), went into the pit, and closed my eyes. I felt like my heart was going to explode. I felt him grab my left wrist and pull. I opened my eyes and just started hitting his helmeted head and kicking him with every muscle in my body engaged. I stayed standing up and probably ran away too quickly, but if that's part of our self-defense, I'll take it. Some women went in for two rounds, but I was fine with just one.

I would recommend such a crash course to any person, of any gender, who has been abused, feels unsafe, bullied, or just wants to learn these extremely valuable self-defense techniques. In San Antonio, three new sexual assault cases are reported daily, with many more that go unreported. Don't be foolish enough to think it won't happen to you, because it can. It could be at a time and by someone you least expect. Even by someone you know and trust. You are not alone. It is not your fault. Learn to defend yourself and never be a victim, or never be a victim again. I'm glad I did Krav Maga's training. A few bruises and two days of total body soreness seem like a small price to pay for the confidence I gained. I didn't even break a nail.