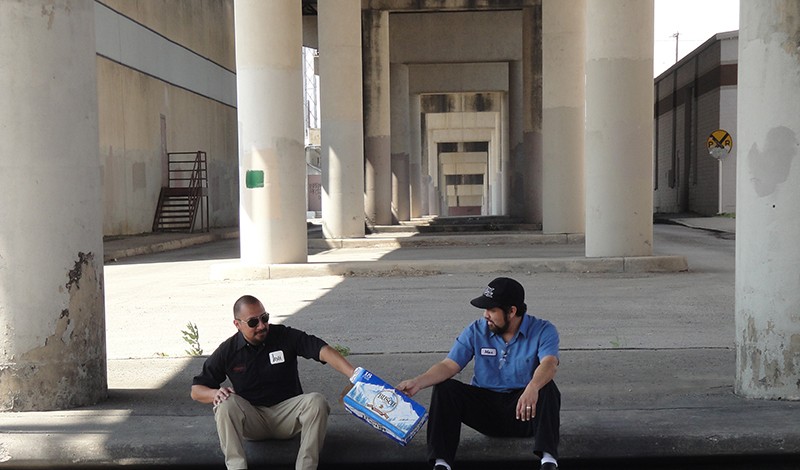 Let's get something straight: Itzli y Chimalli come correct. The SA hip-hop duo of emcee Alvaro "Itzli" Ramirez and producer/emcee Max "Chimalli" Edman pairs well-chosen and diverse samples with socially conscious, street smart, no bullshit, bilingual lyrics. While the two have worked on a few other projects before, their breakthrough started with last year's excellent TXAMX and continues with the even better companion album MXATX. I caught up with the pair over the phone last week, and we discussed the important themes of these two releases and the state of San Anto hip-hop, among other topics.

"If the first album was about looking at Mexico and Mexicans from an American or Texan standpoint, this second album is about looking at America from the standpoint of Mexico, from the standpoint of those who want to cross over," Edman explained. The distinction is both superficially and thematically important: TXAMX translates as "Texas to Mexico," while MXATX translates as "Mexico to Texas."

Edman added: "It's about moving from a local original standpoint to a larger worldwide view of things." Indeed, sonically and lyrically, MXATX immerses the listener in the sounds and struggles of Mexico, and of Mexicans at various stages on the immigrant journey.

With tracks like "Which Way Home" and "La Migra," the duo tackles the issue of immigration from the perspective of individuals lost along the way and of those still engaged in the struggle. On "Which Way Home," Ramirez's Spanish flow tells the true story of Jocelyn Nohemi Alvarez Quillay, a 12-year-old Ecuadoran girl who was found hung in the bathroom of a Juarez jail last March after having failed in her attempt to cross the border and reunite with her parents in New York.

Even the album's simple yet powerful artwork tells an important part of the story. As Edman explained, "The cover art is a short-handled hoe, which was a common tool for immigrant workers until it was partially outlawed because it's so dangerous."

Forced to bend and stoop while using this particular tool (known in Spanish as el cortito), workers faced debilitating back issues and injuries — the implement was fully banned in California in 1975. Thus, the tool itself becomes a symbol for the backbreaking labor, addressed poignantly on MXATX standout "Trabajo," which occupies a paradoxical role in the lives of immigrant workers.

This intense labor is both a solution to, and cause of, many of the hardships facing immigrant laborers. Both Edman and Ramirez identify with these struggles as Mexican-Americans, as blue collar workers striving to finish their college degrees and as people with relatives who have lived the migrant life.

The hope, Edman explained, is that MXATX can help "open up dialogue in the hip-hop community and in the blue collar community, both of which we belong to."

The duo seeks to raise awareness for the uninformed and oblivious and to tell personal and relatable stories for the many voiceless victims of the immigrant journey. Ramirez laments that this type of message-oriented music is not more prevalent in hip-hop (especially local hip-hop).

"Too many people are rapping to themselves and not focused on the audience, because there is no audience or because they are more worried about the spotlight," he remarked. It's hard to know what to say when you are in the spotlight if all you've ever wanted was the spotlight itself.

One possible solution to this vapidity is to reach young listeners with powerful, cause-focused music they can relate to. Ramirez explained that the audience he is most interested in reaching is young people, "from middle school up, because that's when kids first start to think critically and question things. I want to think that we can give them some fuel for that process of discovering themselves."

MXATX is an important album for South Texas and one that can be experienced on multiple levels. The music itself is pure melting pot magic, bringing together elements of traditional hip-hop with cumbia, reggae, soul and other types of Mexican and American music.

Edman's bellowing and commanding flows balance perfectly with Ramirez's emotionally intense, rapid-fire Spanish flows. The album's final track, the Shakespeare-inspired "This Mortal Coil," lends gravity and grave context to MXATX, forcing us to consider our personal and political decisions in terms of our own impending deaths.

The song, Edman noted, begs the question: "What's your purpose? What are you going to do with your life?"