Rassle up some LGBT fun at SA Country Saloon 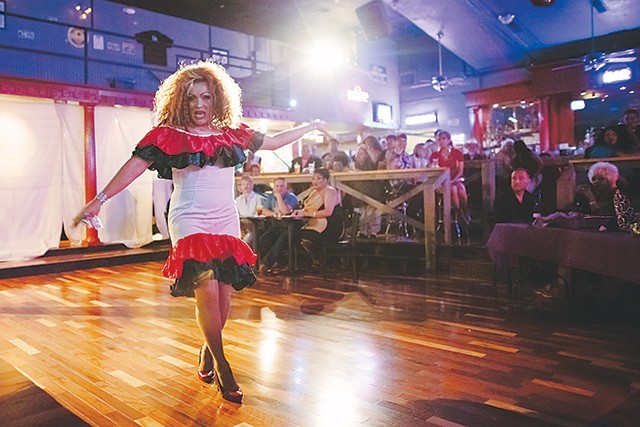 SA Country Saloon can be summed up by its most striking feature: a boot-shaped disco ball, which spins on a floor alternately used for line dancing and drag shows. Housed in what used to be Bermuda Triangle, the Saloon outwardly blends in with its corporate blah surroundings just off San Pedro Avenue’s northern-most reach. Open the oversized wooden doors though, and you’ve entered hunky honky-tonk territory.

Debuting last fall after an extensive renovation to create a squeaky clean, countrified atmosphere, the Saloon caters to an older crowd more appreciative of a Northside neighborhood gay bar rather than a hotbed of club activity. That’s not to say the Saloon doesn’t have it goin’ on: there’s plenty to keep patrons amused from karaoke on Monday and Thursday to Sunday fundays with free pool and 50-cent beers to a country DJ on the weekends and live music on Tuesday. It’s also a local hub for members of the Texas Gay Rodeo Association, who occasionally host fundraising barbecues there.

While it isn’t a rainbow-colored wonderland, the Saloon doesn’t keep anything in the closet either. From the bartenders to the free food buffet, everything says classic gay bar, but doesn’t scream it, necessarily. My favorite bartender looked like a brawny bear but pirouetted like a prima donna. After the evening’s emcee threatened to “pull [a birthday girl] up on stage by her pussy hairs,” bar-bear stage whispered to me, “Oh my goodness! She kisses her mother with that mouth!” Like his two colleagues behind the well-staffed bar, he was superfast and attentive with the drink orders.

Well drinks — fairly cheap to begin with —plummet to $2.25 during happy hour, as do domestic beers. Fancier brews might set you back $3.50. My group’s end of the evening tab, accrued during Monday’s all-day happy hour, totaled $11 for two mixed drinks, one Shiner, and one Red Bull. The bartenders are so quick with the drink orders, in fact, that I didn’t have time to request a premium vodka, but surprisingly, the well variety did not suck, even with a sizeable single pour. If you’re craving a more complicated concoction, you’ll find it in the specialty shot selection here.

As a straight female, I’m not qualified to dish on the hookup vibe, but I noticed lots of friendly, middle-aged guys, both in groups and flying solo, a few lesbian couples by the pool tables, and even some heteros who were, like me, attracted to the main event that Monday evening: the Mr. and Miss Gay San Antonio for Life pageant.

Despite being far away from the Strip, the Saloon is balls deep in the local gay scene, and that means that drag queens and kings grace the stage (under that mirrored boot) frequently. The pageant I caught attracted a lively scene, and unlike more scripted shows or more stringent pageants, this one had a bubbly, amateur atmosphere. Contestants changed costumes behind a sheet, and although tipping was “not allowed” even the judges did it. The event also included a tear-jerking lifetime achievement presentation to Miss CoCo, who gave a command performance despite having been hospitalized just days before. Like many of the contestants, Miss CoCo represented an older style of drag, which focused less on pounding the floorboards to hip-hop and club beats, and more on torch song classics expertly lip-synched by bouffanted beauties in sequined mermaid gowns.

Whether you dig drag or just want a low-key gayborhood experience, the Saloon delivers. Many of the folks I met during my visit hadn’t been there before, negating the regulars-only feel that often accompanies the corner gay bar. Country fan or not, this spotless, friendly joint ups the ante for local watering holes catering to the LGBT community, or anyone, for that matter.