Ah, so there's my answer, once again.

I was wondering how that standard movie philosophy still applied to me. I approached Ratchet & Clank with great anticipation. Can I do anything? Can I be anything I want to be? Am I destined for greatness, to save the world or even the whole galaxy, even if I am a foolhardy, thoughtless, unfocused screw-up with almost nothing to my name but some undisciplined smarts and outsized aspirations of grandeur?

And the answer is still no. Not for the likes of me, anyway, because I am female. The 187,943rd iteration of that standard Hollywood cliché, once again, reassures me that only boys need apply for the land of great destinies. Boys that don't even need to be human boys, as R&C reminds us. You can be a lombax — a sort of half-fox, half-cat vaguely humanoid alien biped — and still presume you are destined for greatness, despite all the evidence to the contrary, and have your ridiculous presumption confirmed 94 minutes later. Just like the lombax Ratchet (the voice of James Arnold Taylor), who hails from a PlayStation videogame series that debuted in 2002 and is generically reminiscent of the incredibly popular videogame hero Sonic the Hedgehog, though I'm sure that's pure coincidence.

"Based on the best-selling videogame" is a warning, not an enticement. It's cute how Hollywood doesn't realize that.

And another thing: "Unlikely hero" no longer means what Hollywood thinks it means. Characters like Ratchet are now seen as a likely, tedious sort of hero. Tiresome. Time to change the record.

Ratchet is a mechanic on planet whatever, where he does things like soup up an elderly generic alien's space car with mods that are totally uncalled for and recklessly dangerous, because that's how he rolls — isn't he awesome? That Ratchet is not actually awesome appears to escape everyone, such as director and cowriter Kevin Munroe. But Ratchet is a boy, and the movie is about him, so presumptions of awesomeness hover around him, regardless. And never mind that the test drive of these unrequested mods with the elderly alien — a paying customer, mind you, who I hope will refuse to pony up for work he did not ask for — is like a rip-off of the pod-racing sequence from Star Wars: The Phantom Menace. 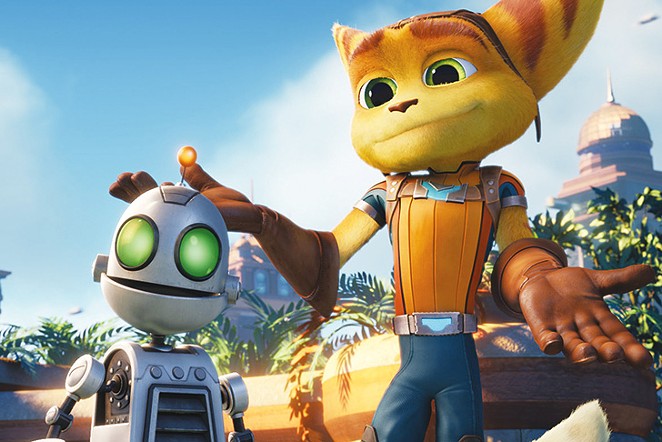 I mean, literally, do not mind this: I surmise that this is a feature, not a bug. Because most of the rest of Ratchet's adventure will be hugely derivative of the Star Wars prequels. The first of which came out just a few years before the videogame that inspired this movie. (I use the word "inspired" loosely. Actual creative inspiration is not a thing that came anywhere near to infecting this flick.) But what a bizarre choice to stick with the visual ethos that may have informed the game, a decade and a half later, and in full knowledge of how the gamers who must surely constitute this movie's sole demographic have come to despise Lucas' self-indulgent prequels.

To be fair, late-'90s and early 2000s era Star Wars is not only the far-better franchise stolen from here. (And yes, even given the problems with those SW flicks, they are still more entertaining than this.) The big bad villain — Chairman Drek (the voice of Paul Giamatti) — may look like an underwater-dwelling Gungan from The Phantom Menace, but his planet-destroying weapon is like the Death Star, which is from a totally different series, the original Star Wars trilogy. And the head of the villain-fighting superhero group that Ratchet wants in on (and which he, of course, manages to triumph among), known as the Galactic Rangers, Captain Qwark (the voice of Jim Ward), is stolen from further afield: he's comic, cartoon and live-action super anti-hero The Tick crossed with Futurama's Zapp Brannigan. Toss in some Strauss musical cues meant to invoke 2001: A Space Odyssey and you have a movie that — and I'm being generous here — might think it's meta but is nothing more than meh.