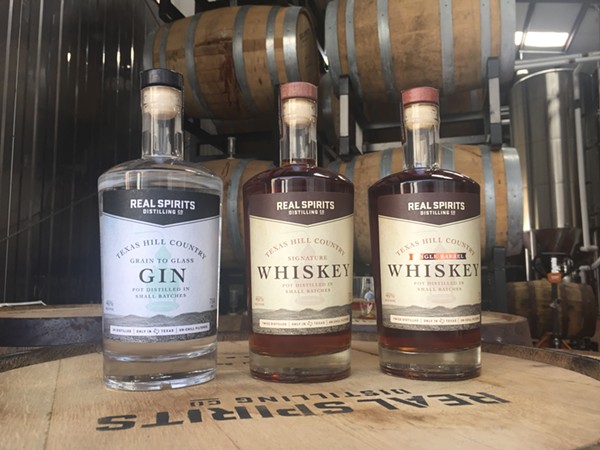 As Real Ale prepares for its 21st anniversary of brewing quality craft beer in the Hill Country, owner Brad Farbstein is making a passion project come true. The whiskey and gin fan will launch Real Spirits Distilling Co. this April with a party, distillery tours and specialty cocktails.

Though years in the making, Real Spirits truly gained speed after Farbstein hired distiller Davin Topel in March of 2016. The distiller is a Jack-of-all-Trades by any definition. Before relocating to Texas after the birth of his first child, Topel had already piled up a list of jobs that included snowmaking, bartending, ski patrol, firefighting and, yes, distilling. He worked at Utah’s High West Distillery, grew more interested about the process of distilling spirits. When Topel’s resume landed on Farbstein’s desk, the former’s outdoor skills piqued the latter’s interest. After interviewing several applicants, it was Topel's relatively newness to the field and his survival skills that helped him land the gig.

“Topel is an outdoors man … he’s someone who can sustain himself in the wild, which I think is a good attribute for someone independently," Farbstein said.

Topel is tasked with developing Real Ale’s spirit and barrel program and the results will be available for consuming starting April 8. The process is familiar to those who’ve stopped by the ever-expanding brewery. Topel takes Devil’s Backbone, a Belgian-style tripel, and Real Heavy, a Scotch ale, and distills them into a Signature whiskey and a single-barrel whiskey. The Real Ale Belgian wit is used for the gin. Hops are left out of the brewing process to accommodate for the spirit mash. 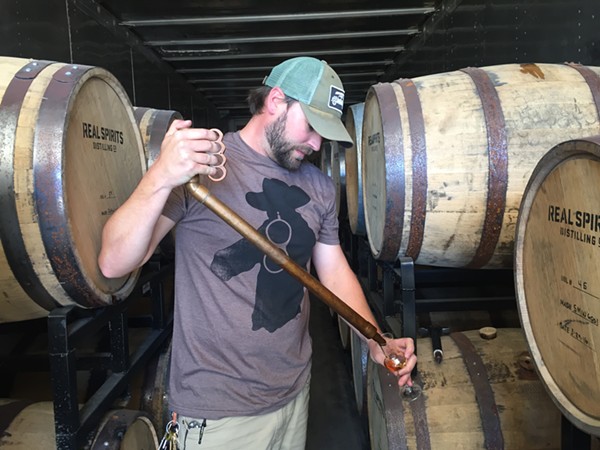 And it makes the spirits hard to replicate, especially as they go in a program that uses spirit barrels to age beers.

“Using the beers as the base is truly unique and cannot be mimicked by other people,” Farbstein said.

The gin, made using Real Ale's Belgian wit, doesn’t make the most sense from a financial standpoint as the wash starts with a low alcohol content and is distilled twice to beef up said proof. The third distillation is when the botanicals — all 10 of them — come in to play inside the Spanish HOGA hand-hammered still that holds 265 gallons. Much like newcomer Seersucker gin, Texas is front and center for this bouquet that really only calls for a splash of Topo. Expect notes of Rio Grand Valley grapefruit and Blanco lavender, along with orange peel, lemon peel, juniper, yaro root, Australian bottlebrush, grains of paradise, angelica root and lime. The gin is then aged for 60 to 80 days, a process borrowed from the Cognac industry.

All spirits will be available in 750 milliliter bottles. The catch? Whiskey and gin fans can only buy two a month per person at the Blanco-based brewery, per TABC rules.

"This isn’t going to be a high-production, high-volume distillery,” Farbstein said while noting the spirit industry’s few large players that make entering the field ultra-competitive. “We want to focus on the artisanal side of this. There are no plans to distribute.”

A traditional Manhattan will be offered along with a Whiskey Smash using house-made hibiscus mint simple syrup. Garnishes will be sourced from Pure Luck Cheeses who grown their own herbs in Dripping Springs. Topel’s gin-based tipple, the Blanco Breeze, will feature gin, cucumber, lemon, Topo Chico and a sprig of Blanco lavender.

The experimentation won't stop at whiskey and gin. Plans are in place for a pear brandy (watch out Kinsman Rakia) later this year, as well as some barreling experiments.

“I would say there is no limit for the program,” Farbstein said.