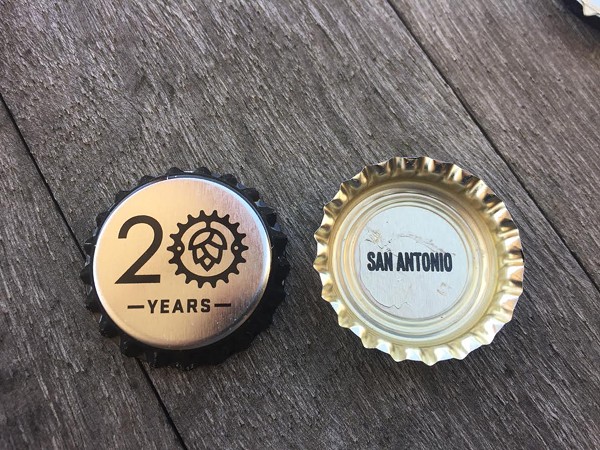 Besides the venerable St. Arnold’s in Houston, Real Ale is the oldest brewery in continual operation in Texas. From the wildcatter wilderness of the mid-90s and through the battles fought (and won) against both the TABC and Spuds MacKenzie, the best little brewhouse in Blanco helped wean the Greatest State’s collective taste off of fizzy yellow swill and replace it with a love of the good stuff.

That’s something worth celebrating for any twenty-year-old, and you’d better believe Real Ale is throwing down in style.

2500 RA diehards are expected to convene at the brewery this Saturday, rain or shine, for one doozy of a Hill Country get-together. Twenty bucks lands you a party pass and four beer tickets, which you can exchange for any of the 50 beers on offer. Considering the offerings include at least a baker’s dozen of the rare, Latin-monikered Mysterium Verum series, it’s well worth the gas and five-dollar parking fee to drink awesome beer in the Hill Country.

The signature beer of the day, naturally, is Real Ale’s 20th Anniversary release, an Imperial Rye IPA that revamps one of the best beers of 2015, the Full Moon Rye IPA (itself a descendant of the Full Moon Pale Rye, Real Ale’s first flagship beer). If you don’t get a taste on Saturday, don’t despair: the IRIPA will be available in bombers and kegs the following week. There’s also a special edition aging in a barrel of undisclosed alcohol origin this very minute.

In addition to producing the special-edition anniversary bomber, every bottled Real Ale beer released this month will feature a twentieth-anniversary bottle cap printed with the name one of fifty different Texas towns. Real Ale will also soon be offering a special limited-edition, Texas-shaped bottle cap board
for the Ash Ketchums out there. If you can’t totally justify buying a Texas-shaped bottle cap board to your significant other, you can send a happy birthday message directly to Real Ale, who will choose 12 lucky recipients from now until next April from among the well wishers. A birthday party where you get the gifts? Now that’s the spirit.