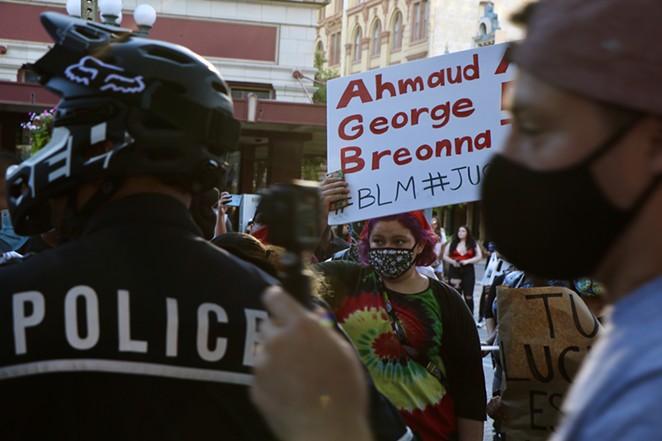 Editor’s Note: The following is Current Events, a column of opinion and analysis

In 2016, Saldaña was one of just two members of council to vote against renewing the union’s current collective bargaining contract with the city. His objection was that the pact — the result of a drawn-out fight primarily focused on health care benefits — included no provisions for disciplinary reform.

“Back then, there wasn’t a grandstand full people who were on fire about the issue,” said Saldaña, who now heads national education advocacy group Communities In Schools.

“Now, they’re not only on fire about the issue, but they’re also very specific about what they want. It’s going to be different this time, but it’s still going to be very hard.”

If you’ve been following the concerns raised by San Antonio’s Black Lives Matter protesters, you’re likely familiar with the statistic — more than two-thirds of San Antonio officers fired over the past 10 years ended up back on the job thanks to the arbitration process included in the police contract.

Chances are you’re also aware of the reprehensible conduct of cops allowed to return through that process.

• Officer Tim Garcia was caught on video calling a suspect a “fucked-up n—r” during an arrest at a local mall.

• Officer Matthew Belver challenged a handcuffed man to a fist fight, telling the suspect that’s how he could win his release. It was the second time Belver managed to overturn a firing.

• Office Matthew Luckhurst tried to feed a sandwich containing dog feces to a homeless man. He’s now awaiting an arbitrator’s ruling on whether he can keep his job after a second firing for an unrelated incident also involving fecal matter.

The process works in the favor of bad cops, critics charge, because the union gets a say in selecting which attorneys can serve as arbitrators. That means there’s a built-in incentive for the lawyers not to hand down decisions that piss off the union.

But an unfairly tilted arbitration process is only part of the problem.

In many cases, the union contract prohibits prohibits evidence of previous bad conduct from appearing in officers’ arbitration hearings, and it also includes provisions that seal records of past misconduct from the public and media. What’s more, officers charged with civil infractions get 48 hours before being interviewed by investigators, during which time they can review any evidence against them.

Under the rules, SAPD administrators have just six months to administer discipline against accused officers. That countdown starts the instant the department becomes aware of a potential criminal charge. But when it comes to civil matters, managers can only act within 180 days of the incident itself.

Taken together, those protections embolden bad actors, who realize “terminated” in many cases really means “suspended for 30 days.”

Beyond that, the high bar to fire lousy cops tells good officers there’s no incentive to call out misconduct. After all, why risk the hassle and potential ostracization if it only results in a slap on the wrist?

But the rage right now about officer conduct is powerful and palpable. And it’s something the union brought upon its own membership.

“During the past collective bargaining, I thought officers were overplaying their hand and jeopardizing their good will with the public,” said Gerald Reamey, a St. Mary’s University Law School professor who tracks policing issues. “You always need to work to win the public’s support. If they turn against you, all hope is gone.”

Indicative of that lack of trust, San Antonio activist group FixSAPD is calling for a public vote to overturn Chapters 143 and 174 of Texas’ Local Government Code, both of which strengthen the ability of police and their unions to thwart disciplinary reform. The group’s objective is worth support, but it’s in for a tough fight against well-funded adversaries.

In the meantime, it’s incumbent upon city officials to listen to those calling for reforms and be ready for the ugly street fight it will take to address those concerns during bargaining. Combative SAPOA President Mike Helle recently announced his retirement and won’t be at the table this go-round, but that doesn’t mean an easy battle, Saldaña warns.

“My crystal ball tells me the next person to head the union will be just as obstinate, if not more so,” he said. “The membership won’t be looking to pick someone who’s open to thoughtful collaboration. They’ll look for someone who’s going to throw hand grenades.”

To be sure, SAPOA’s political clout runs deep. It’s spent decades learning how to use both campaign contributions and the door-knocking power of its membership to bring members of both council and the Texas Legislature in line with its agenda. The union’s spending to unseat Mayor Ron Nirenberg — who, as a councilman, cast the other vote against the 2016 contract — is evidence of its willingness to play hardball.

Clearly, San Antonians are tired of being afraid of their own police force, tired of knowing how hard it is to strip badges from bad actors. The question is whether the mayor and council will defend their constituents or back a union that’s shown a lack of regard for the same residents its members took oaths to protect and serve.