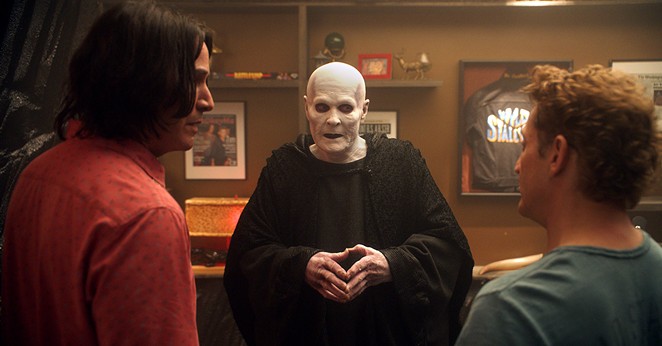 When audiences last saw actor William Sadler’s Grim Reaper during the end credits of the 1991 sci-fi comedy Bill & Ted’s Bogus Journey, he was on his way to a space station to play a concert as the bass player of the fictional band Wyld Stallyns.

Although Death tried to break out on his own as a musician, his bass-only solo album was a flop. He was also caught up in a lip-syncing scandal that hurt his career. In the aftermath, Death split from the band and has been living a lonely existence in Hell for the past three decades.

In Bill & Ted Face the Music — the third installment of the cult-classic movie franchise — Sadler’s Death reunites with his time-traveling former bandmates Bill (Alex Winter) and Ted (Keanu Reeves) to save the world while rockin’ out.

During an interview with the Current last week, Sadler, 70, best known for The Shawshank Redemption and the TV series Roswell, talked about reprising his role as the Grim Reaper nearly 30 years later, what a spin-off movie starring his character would look like and what he plans on telling Death when his time has come.

Bill & Ted Face the Music will be released at theaters and on VOD August 28.

What was your initial reaction when you found out a third Bill & Ted movie was happening and that they wanted you to reprise your role as Death?

(Laughs) I was astonished. I wasn’t expecting it at all. It’s like finding out you’re pregnant again when you’re in your 50s. I mean, there had been talk about it, but that was years ago. When I talked to the writers and they said they were working on a script, that’s when it became real.

In the new film, we really don’t learn what Death has been doing for the last three decades. How do you imagine he has been keeping busy all this time?

I think he’s had a really rough time in the music business. I think he’s put out album after album after album, but they’re all bass. It’s all about the bass — no treble. So, the albums have bombed, and the critics have been beating him up. When we meet him [in Bill & Ted Face the Music], he’s a little bitter and bent out of shape. He’s not handled it well. He’s had a rough couple of decades, so he’s in a bad place.

I would hope he’s like Keanu and is kind of timeless. I think [Death] has been around for millions of years, so I think his personality is pretty much set by now — this petulant, needy, insecure guy.

How did you originally come to the decision to give Death an accent?

When I auditioned for Bogus Journey, the role said “Death,” and that’s it. It didn’t suggest an accent of any kind. But I knew they wanted him to be funny. I couldn’t find a way to make him funny just using my own accent from Buffalo. So, I reached back and grabbed this Czechoslovakian accent that I learned from an actor back in New York, who is Czechoslovakian by the way. Then, everything he said was funny. The character just came to life.

What kinds of music do you listen to these days? Do you like songs with 45-minute bass solos like Death does?

No, I don’t. That sounds like self-indulgent horse crap. I don’t even like the Grateful Dead when they do 17-minute guitar solos. I mean, if you can’t say it in a few minutes, you don’t really know what you’re saying. I’ve been listening to a lot of John Prine lately. For some reason, he wasn’t on my radar for most of his life. A year or so ago I discovered him, and then he died. I’ve been having a lot of fun learning and singing his songs.

Death, of course, will visit everyone sooner or later. What would you tell it when your time comes?

I’d like to think I wouldn’t be afraid. It’s been a really remarkable ride. I have this wonderful career. I have a family that loves me. It’s really been lovely. I would tell him, “Just make it quick, OK? Let’s not stretch it out. C’mon, let me get hit by a bus or something.”

First of all, I think the movie would be called Reaper Madness. Maybe it would follow his musical career and the difficulty of being a bass player who doesn’t have anyone else in the band.

Lastly, you do some voice work on the Showtime animated series Our Cartoon President. How are you able to make Mitch McConnell sound so turtle-y?

(Laughs) … (Impersonating Mitch McConnell) That’s unusual, isn’t it — that he has [a normal] voice? Sometimes, you just take a shot at it. If you do the voice and everyone in the room starts laughing, then you know you’ve nailed it.