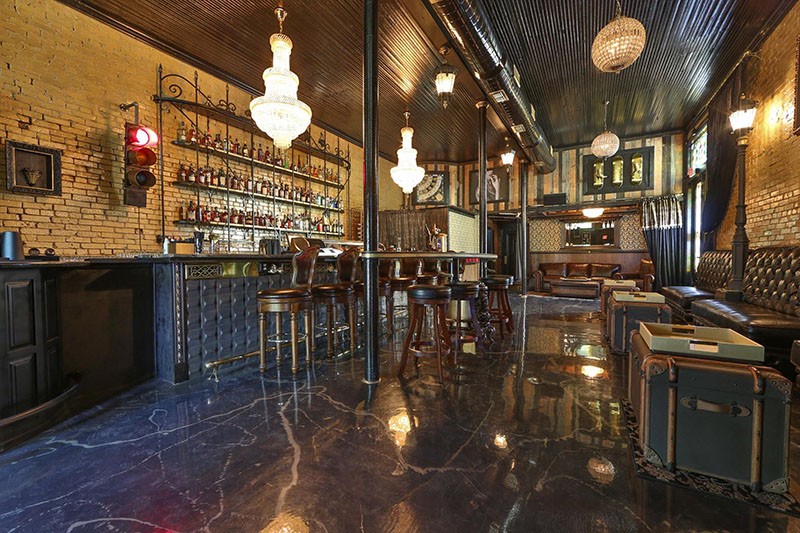 I've seen the Facebook posts and I've received the messages. Yes, Juniper Tar has rules. And like them or not, they're not going away any time soon. As the first solo concept via Matty Gee, a New York transplant who now calls San Antonio home, Juniper Tar will not lighten up on its collared shirts, no flip flops rules ... so why not give it a shot?

This isn't about an issue of gentrification. There are already plenty of bars in San Antonio that sell $10-plus cocktails. And as far as Gee is concerned, he really isn't asking for a whole lot.

Juniper Tar opened a mere two weeks ago and the place is still relatively secretive. A Facebook page is still in the works and a chatty Twitter feed keeps folks informed on the goings-on inside the black-and-gold-plated place – but otherwise, folks are still in the dark as to what's available behind the bar, what the hype is about and why they have to wear a damn button-down shirt.

This isn't a popular opinion, but isn't San Antonio, a supposed #cityontherise, ready for a bar they might have to leave the chanclas at home for?

Juniper Tar is actually a lot to take in. The name spent the last six years brewing inside 34-year-old Gee's head. Although a florist by trade, he has spent the better part of his adulthood behind the well. He worked with famed cocktailian Sasha Petraske (who trains all of Bohanan's bartenders) of New York's Milk & Honey; he later helped re-launch The Randolph at Broome before making his way to San Antonio to work at Bohanan's and Blue Box. Gee has had plenty of time to think about what would make a great bar.

For him that means blending all things of beauty — art, fashion and cocktails — into one ornate building. The former home of El Nuevo Tenampa received a serious makeover when Gee and company took over the 1,000-or-so-square-foot space. Nearly everything in the bar has been sourced within a 30-mile radius of San Antonio. Without giving all of Art Deco/Baroque charm away to would-be visitors, Gee and Hilmy Productions Creative Coordinator, Linda Romero, amassed an almost ridiculous number of both antique and curio decorative elements, while also creating a few along the way.

The original Hertzberg Jewelry Co. sign was gold-plated and hung inside a gilded frame; a wrought-iron fence was commissioned to "guard" the extensive spirit collection from Oscar's Custom Iron Works off Blanco; the meticulous glass windows were crafted by Michael Parker of Parker's Custom Stained & Etched Glass. Local craftsmanship, as you can see, played a huge part in the bar's design.

Juniper Tar's thoroughness is also evident in the drink menu, which features one cocktail for every spirit, all ascribing to the "less is more" mantra.

"We brought in the sushi cooler to come in as our jewel case," Gee said of the fruit-filled cooler that sits atop of the bar, "It's one thing to talk about what's in a cocktail, and another to see it going in."

Having said that, the bar's size also helps drive home that client-first service Gee and his staff are trying to imbue. Juniper Tar is intimate enough so your bartenders can see you, and you can see them. "It's about transparency, so the customer sees we're not back there on our phones."

The rules aren't as strict as they may seem. A collared shirt is required, sport shorts are a no-go and flippy-floppies are definitely barred, but Gee isn't asking for suits and ties. The lanky owner, whom I had only previously seen fully decked out in suits, was wearing a short-sleeved button down, dark wash jeans and casual sneakers when I stopped by last week for Downtown Tuesday, the first for the bar. I wore a spring sundress with flats and the doorman happily let me in. The array of bar-goers that day ranged from khaki-clad seniors on vacay, River Walk employees, other bar owners and couples on dates. No one was especially dressy and all were having a rad time.

Though reservations aren't required, they are encouraged. The space holds 50 people, so come weekend nights, you'll want to make sure you can get in. Juniper Tar might turn into a regular haunt for some who can afford the $14 cocktail habit, but even this strapped scribe can look forward to enjoying an upscale, adult bar-going experience every once in a while.

You're not going to Bohanan's every night to buy a $100 steak, and that's the same idea for JT's cocktails. Special occasions, anniversaries, job promotions, high-class entertainment for work clients and a boozy cure for all that ails you – stroll over to Juniper Tar, they've got you covered.