Ground lamb kebabs have seen their last plate at Rebelle, the second restaurant by Andrew Goodman and chef Stefan Bowers.

As of Tuesday, the restaurant shifted their focus to seafood with a new menu created by Bowers and chef de cuisine Alan Dale Nelson.

The plan had been in the works for the past three months with the staff running specials based on whole fish.

"I didn't want to cut corners, and I wanted them to learn how to work with [a whole fish], in order to keep them creative," Bowers said.

The success of the special features strengthened the chefs resolve to steer the lauded restaurant in a new direction. The lack of seafood options in downtown and Rebelle's loosely described concept also helped motivate the chef to make the jump.

"Rebelle wasn't easily described, it was always an esoteric answer, or no answer," Bowers said.

Beef is still present on the Rebelle menu with some thick cuts and the addition of the Rebelle burger. Dishes will vary between the mid- to high teens for hot bites, and the mid-30s for the prime seafood, such as an East Coast flounder, Artic char, ruby trout stuffed with shrimp butter, red snapper ciopinno and Georges Bank sea scallops.

Check out the entire menu below. 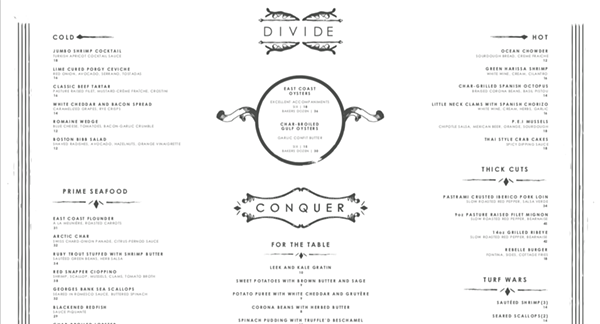