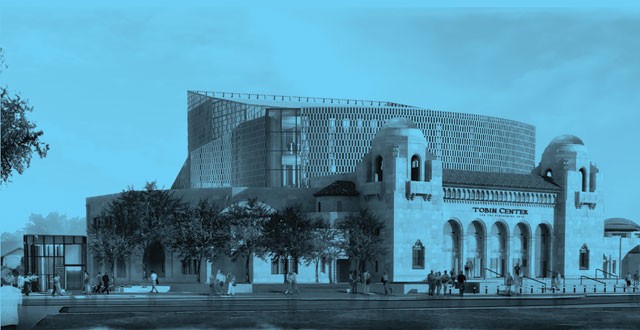 Dozens of museums have closed across the country in the last four years. Many more have slashed staff, and new blockbuster shows have become a rarity as cultural institutions cling to their scarce resources in our down economy. This year the state Lege cut the budget of the Texas Commission on the Arts in half, leaving the arts in municipalities scrambling for cash money. Compared to many other cities, SA is not doing half bad, but it hasn't been easy sailing. Cries of "facadomy" accompanied last-minute attempts by conservationists this summer to stall the build-out of the Tobin Center for the Performing Arts. But the project — made possible with a $100 million bond election in 2008 — continued. The old dome of the Municipal Auditorium came down; the new home for the city's symphony, ballet, and opera is slated to open in September 2013. The new building will retain the front of the 1926 building on the River Walk, but replace the massive old hall with two state-of-the art theaters and a new sloping approach to the water's edge.

The San Antonio Museum of Art brought in a new director this July. Katherine Luber (Ft. Worth-born, Houston-raised) returns to Texas after stints at New York's Metropolitan Museum, the Kunsthistorisches Museum in Vienna, and a tenure as a curator of European painting at the Philadelphia Museum of Art. Buzz in the arts community has been positive since Luber arrived last summer; she is often seen in the company of SAMA curator David S. Rubin at openings, a rare showing among top art execs. Rubin has organized a series of shows that give the spotlight to arts supporters in 2012. San Antonio Collects begins with an exhibition opening January 17 that focuses on African-American artists.

The Briscoe Museum of Western Art also has a new director. Steven Karr is the ex-director of the Southwest Museum of the American Indian at the Autry National Center of the American West in L.A. Long under construction and initially expected to open in 2009, the Briscoe is now slated for completion in 2013, and has obtained $27 million of $30 million needed to complete the Lake/Flato-designed addition and conversion of the historic River Walk post office building. (Not to be outdone: San Antonio Children's Museum received $20 million from H-E-B chairman and CEO Charles Butt to relocate from downtown and into a to-be-built complex on Broadway. The projected 70,000 square-feet facility will almost double the museum's present size, and will cost $45 million.)

One of most acclaimed art shows in SA during 2011 was New Image Sculpture, featuring post-pop experiments by national artists (some from Texas), organized by the McNay Museum's chief curator, Rene Paul Barilleaux. The year also marked the 20th anniversary of William J. Chiego as director of the McNay. 2012 will bring a host of shows culled from the McNay's collections, and in February Andy Warhol: Fame and Misfortune will bring in over 150 objects from the Andy Warhol Museum in Pittsburgh, PA (the artist's hometown).

The San Pedro Playhouse incurred the wrath of conservative religious activists when it staged Terrence McNally's play Corpus Christi, wherein a Christ-like figure participates in a gay marriage. Repeated visits to City Council meetings by protesters culminated with demands that the City-sponsored theater be defunded. The playhouse survived the ruckus, and was included among receivers of grants from the Office of Cultural Affairs in the 2012 budget. Not so lucky was the Museo Alameda. The fledgling museum charged to "tell the story of the Latino experience in America through art, history, and culture" rated below the minimum score needed to receive OCA funding. The Council did, however, renew the MOU with the Alameda that provides monies to cover operating costs of the City-owned building. Plans for the future of the perpetually beleaguered Smithsonian affiliate now hinge on the ability of a single planned exhibition in 2012 to raise sponsorship and motivate community support. The show is about tequila, "the spirit of Mexico." Good luck with that.