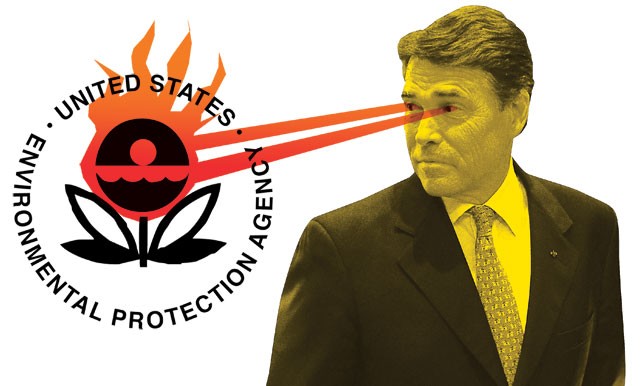 As 2011 dawned, state leaders were openly refusing to abide by new nationwide greenhouse gas emissions standards. While the Environmental Protection Agency took over the process of permitting at new power plants, refineries, and other large industrial facilities, industry reps and many a GOP lawmaker decried the EPA's so-called "war on Texas." Attorney General Greg Abbott took the fight to the courts, while the Perry-appointed commissioners of the Texas Commission on Environmental Quality opted instead to thumb their nose at the EPA, eventually approving the building of Corpus Christi-area petroleum-coke-burning Las Brisas power plant in clear defiance of the federal agency. If you ask Gov. Rick Perry or the state's other GOP lawmakers, they're likely to tell you the EPA has been an irresponsible, heavy handed, job-killing regulatory machine. "There's, I think, some unfortunate rhetoric that comes from the head of some of the agencies in the state of Texas and by people in the governor's office," Region 6 EPA administrator Al Armendariz told the Current last month. "It would be great if they would tone down the rhetoric."

Not likely to happen.

This month, the EPA rolled out rules to reduce the release of mercury and other toxic emissions, rules that were first requested by Congress more than 20 years ago. According to the EPA, the new rule will prevent 11,000 deaths a year. And with Texas holding the honor of being the nation's top mercury polluter, the state's coal-fired power plants here spewed 16.9 percent of the total U.S. mercury air emissions in 2010, it's no wonder some are a little touchy. A Perry spokesperson told the Associated Press that the new regulations were just "a continuation of the Obama Administration's assault on traditional American energy sources and the good American jobs they support."