Reclaiming the Garden of Eden 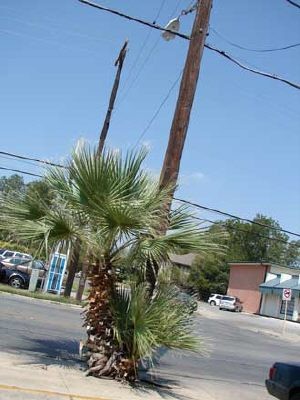 Coyotes have returned to Olmos Basin, millions of American Snout Nose butterflies are on the wing, and, just north of the McCullough-Hildebrand intersection, an opportunistic palm tree has planted itself next to a telephone pole. Each is a striking reflection of the integration of the natural and human landscapes, a weave so tight that it often escapes our notice or comprehension. But if we ever want to make our presence on this good land more sustainable and benign, we must pay closer attention to the dynamic terrain that encompasses all life in south-central Texas.

This claim about the human place in nature carries with it an assumption that must be acknowledged if we wish to repair our small spot on this large planet. So Henry David Thoreau argued in Walden (1854), when he urged his readers to “Explore Thyself” as the essential first step to enlightened action.

Call that the Adam-and-Eve defense. They were booted out of Paradise for knowing themselves (and each other), and we haven’t stopped talking about the price they paid for that delicious bite into self awareness, making their story the source of a deep-seated tension in Western culture. Because they fell from grace, humanity was expelled from Nature, an Eden we cannot regain; separated from the physical world, we defile what we touch. Because our every act is a sacrilege, we are aliens on Earth, our home ground.

Genesis thus spawned the millennia-old idea that there is a line we cannot cross. Yet, paradoxically, we must cross that divide if we are to escape the devastating consequences visited upon us by a Biblical conceit pitting us against nature. If the human can never enter the wild, and the wild can never be human, then there is no reason for us to feel responsible for any species except our own, or to embrace any landscape other than those we have constructed. By this self-referential logic, no coyote, butterfly, or palm has standing.

Naturalist John Muir knew better. While trekking a thousand miles from Wisconsin to the Gulf of Mexico in 1867, he had an epiphany: Nature and its plentitude operated not for human gratification but for its own ends. With this appreciation, he put humans in their place, less exalted and more alert.

That’s why conservationists must get their hands dirty, observed ecologist Aldo Leopold in Sand County Almanac (1949); the best definition of their ethic “is not written with a pen, but with an axe. It is a matter of what a man thinks about while chopping, or while deciding what to chop.” Internal contemplation has external ramifications: “A conservationist is one who is humbly aware that with each stroke he is writing his signature on the face of his land.” Only when we admit that our actions have consequences, and that we cannot not act, will we be able to embrace an environmentalism that seeks “a state of harmony between men and land.”

DDT proved Leopold’s point. Rachel Carson, in Silent Spring (1962), tracked its poisonous path through air and water and with terrifying ease revealed how it altered genetic structures of flora and fauna, not least of the humans who invented the deadly carcinogen. By our every inhalation and swallow, we affirm our ecological integration, our earthly bonds.

Communities are also bound up in their environs. Certainly San Antonio could not exist without the Edwards Aquifer and the recharge features that created its cavernous extent, the springs from which have bubbled billions of gallons of water, and the river that has borne away its life-giving force. The hunter-gatherers who roamed the Balcones Escarpment for more than 10,000 years recognized this dependency, as did the Spanish who arrived in the late 17th century. That reliance has remained, even as the Alamo City has evolved from a frontier outpost to its current concrete expanse.

The challenge now is to bind together this robust natural system and the human ecology that is utterly dependent on it. From landscape preservation to aquifer protection and wetlands restoration; from green building to alternative energies and smart growth — we must better meld the community with its commons. For some the task will be to punch holes in the impervious cover, making a more porous city. For others, it will be to extend the city’s park system within the valley, enhancing recreation and aesthetics. For still others the goal will be to re-center San Antonio, luring people back to the very in-town neighborhoods from which so many fled to chase the suburban dream, and putting a brake on our intense reliance on the automobile that made such sprawl possible. No less critical is the conscious pursuit of social justice: Demanding a living wage for all workers, boosting their and their children’s educational prospects, constructing affordable homes, like the crying need for a more diverse economy, are some of the hurdles we must clear to insure public well-being and ecological health.

Let’s face it: These goals will not be easy to achieve, and even if we are lucky they will take generations to be realized. Still, we must persevere, like the river’s relentless reach to the sea. l

Char Miller is professor of history and director of urban studies at Trinity University. He is author of the award-winning Gifford Pinchot and the Making of Modern Environmentalism and Deep in the Heart of San Antonio: Land and Life in South Texas, and editor of On the Border: An Environmental History of San Antonio.