Red as Ever: Texas Dems raised issues but lost elections 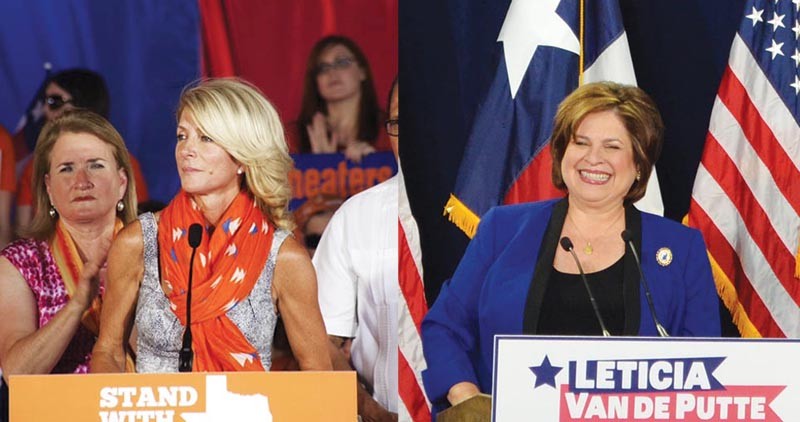 In what many thought would be the election cycle in which Texas Democrats would regain at least some political momentum at the polls, the exact opposite went down last week.

Not only did Democrats lose, they fared worse than they did in the last midterm election. Last Tuesday, Democratic candidate for governor Wendy Davis lost by 21 points to her Republican opponent, Governor-elect Greg Abbott. In 2010, former mayor of Houston and Democratic gubernatorial candidate Bill White lost to then-incumbent Rick Perry by 18 points. Leticia Van de Putte, a Democrat from San Antonio, lost her battle against Dan Patrick, Houston Republican and radio-talk-show-host-turned-senator, in the race for Texas lieutenant governor. (Although she did win in Bexar, her home county, where Davis lost.)

The margins startled Democrats. On top of the Democratic losses, nearly 300,000 fewer Texans voted this year than in 2010.

With the help of Battleground Texas, a political-organizing machine led by the same campaign strategists that ran President Obama's successful 2012 reelection field operation, turnout for Democrats was supposed to skyrocket. The group was armed with millions of dollars and 34,000 volunteers with the goal of turning Texas at least purple by getting low-propensity voters to the polls. Battleground essentially took over Davis' field campaign.

"It's got to be locally controlled where you understand the local dynamics of the election," Archer said. "The people that run the politics in Cameron County couldn't all of a sudden descend into Webb County, even though they're two border counties, and expect them to know how to get the base vote out."

Others wondered if this cycle was too early for the Battleground effect. When they first arrived in Texas in 2013, the group had their eyes on more local races, but when Davis stood for 11 hours last summer to filibuster Texas' strict abortion law, she landed at the top of the Democratic ticket. Suddenly, we had a statewide run on our hands that Battleground couldn't ignore.

When it comes to Van de Putte's campaign against Patrick, Archer believes she was under-resourced and underutilized.

Much air time and ink has been devoted to dissecting what went wrong. Is Texas moveable, politically? Are we a red state or a non-voting state? Why didn't Battleground deliver? Why did the Democrats not only lose, but lose as badly as they did?

The Davis and Van de Putte campaigns forced Texas to have statewide conversations about issues that disproportionately affect women, especially women of color. A woman earns 79 cents for every dollar a man earns in Texas, according to the National Women's Law Center. The wage gap is even worse for women of color, with Hispanic women earning 44 cents for every dollar earned by white men, and African American women earning 59 cents. More than 60 percent of minimum-wage earners in Texas are women. Davis and Van de Putte made those realities cornerstones of their campaigns.

They also addressed health-care access: 600,000 women remain in the coverage gap after Texas Republican leaders refused to expand Medicaid. Not to mention access to safe, legal abortions: 5.4 million reproductive-age women live in Texas. Public education and marriage equality were also at the forefront of Davis' and Van de Putte's campaigns.

So what's next for Davis and Van de Putte? Will Davis, whose Fort Worth Senate seat is now held by Republican Senator-elect Konni Burton, run for office again? What about her comadre Van de Putte? Recent chatter suggests the San Antonio Democrat, who still holds her seat in the Senate, might be mulling a run for mayor of the Alamo City. In response to inquiries about her future plans, Van de Putte thanked her supporters.

"At this time, I am enjoying my family and praying for guidance," she said.