Remembering the Year the Music Died

To say that David Bowie had a monumental impact on the direction of popular and avant garde music is not only somehow an understatement, but it fails to encapsulate the full cultural magnitude and the deep impact of the man that fell to earth.

As a performer who challenged racism and sexism openly, early, and often, as an individual who championed identity as a sacred tapestry to be embellished with delirious joy and somber reverence, as a person intent on thumbing his nose at gender roles, rock star poses, and political pacification alike, Bowie did as much good socially as he did musically. The consummate artist, Bowie ended his long odyssey on this planet with one of his finest works ever, the dense yet smirking album Blackstar, released just two days before his death.

The value of an unflinching and exemplary life like his, consumed in creative impulse and in staring down the future, even under the weight of a fast-approaching death, cannot be overstated. It’s reassuring to think of all the young folks, especially, who must have connected with Bowie and his music for the first time this year. — James Courtney

This year, Phife Dawg, real name Malik Taylor, would have celebrated the 25 year anniversary of the release of one of the greatest, most influential hip-hop albums of all time, The Low End Theory. For Phife, it was his breakout work with the Queens rap collective A Tribe Called Quest, proving himself the 5-foot assassin who assaulted you with insightful, insanely quotable lines.

Phife will be remembered as one of the brilliant lyricists we lost in 2016, but to many, he was also a representative of the fundamental humanity at the core of all good hip-hop. His words were thoughtful but unpretentious, his music substantive and truly original. That’s why he connected to such a broad group of people — from all corners of the music and hip-hop communities to the goofy Atlanta traffic reporter who threw Phife lyrics into an entire segment about the morning commute in honor of the dearly departed.

A Tribe Called Quest was in the process of recording its first album in 18 years when Phife died this spring. By fall, they’d released their final opus, and Phife’s voice, recorded before his passing, permeates the record. Even when he’s gone, Phife’s on point. — Michael Barajas 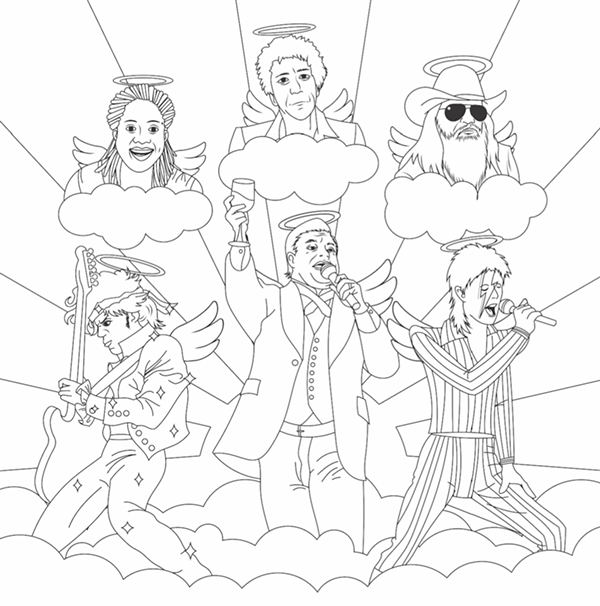 Merle Ronald Haggard earned the kind of titles you’d expect of a master troubadour with a checkered past — the poet of the common man, the bard from behind bars.

Haggard, who spent some of his formative years in and out of penal institutions (including San Quentin, where he watched Johnny Cash perform), sang a great deal about prison. His velvet-voiced croon was a departure from the wiry drawl of Hank Williams or the grit of Cash. With an impossibly beautiful voice, Haggard spoke hard truths — about alcoholics or men forced to live “on the wrong side of the law.” In the process, he became a voice for the displaced, a champion of true country blues singing about hobos, trains, jazz, working class folks and down-in-the-dirt criminals doing what they can to scrape by. His disdain for politicians made him one of country’s iconic dissenters.

When asked about what inspired his songwriting, Haggard once said, “There is a restlessness in my soul that I’ve never conquered, not with motion, marriages or meaning … [It’s] still there to a degree. And it will be till the day I die.” It was that restlessness that made Haggard, in Bob Dylan’s words, “as deep as deep gets.” Thank God for that restlessness. —MB