'Renoir': The painter, his model, and his son 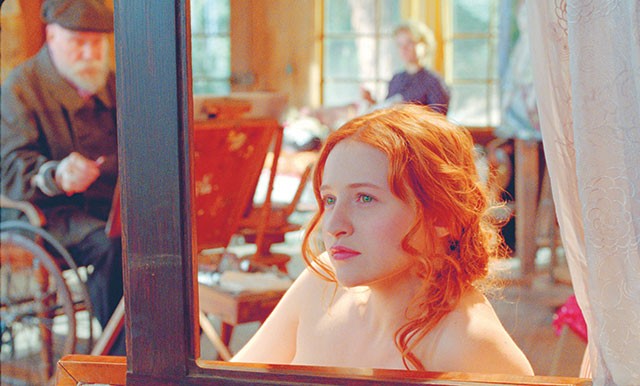 It is hard to think of a father-son combination that distinguished itself more in two different art forms than the Renoirs père et fils. Pierre-Auguste Renoir (1844-1919) was one of the leading figures in the Impressionist movement, and as crucial as Pierre-Auguste was to the history of painting, his son Jean (1894-1979), who directed Grand Illusion and The Rules of the Game, was equally so to the history of cinema. (Jean’s son Alain, whom I knew, degraded the family pedigree — he became a renowned professor of comparative literature, and an American). Yet another Renoir, Pierre-Auguste’s great grandson Jacques, wrote the book on which Gilles Bourdos bases his disappointingly inert film Renoir.

It is summer, 1915, and Pierre-Auguste Renoir (Michel Bouquet), a 74-year-old widower, is attended by a bevy of nubile women, some of whom began as models and now cook, sew, and launder for him. Though wracked by rheumatoid arthritis, the gruff old man continues to pursue his art on a rural estate in southern France. An attractive newcomer, 15-year-old Andrée Heuschling (Christa Théret), is soon posing for him nude, indoors and out, and upending the household hierarchy. When 21-year-old Jean Renoir (Vincent Rottiers) returns, wounded, from World War I, father and son compete for Andrée’s affections. She is drawn to both, but, an aspiring actress herself, is frustrated by Jean’s apparent lack of ambition. “You’ve got to seize everything life has to offer,” she urges him. And he pledges to pursue a career in film, with her.

Cinematographer Mark Lee Ping Bin, who has shot most of Taiwanese master Hou Hsiao-Hsien’s features, attempts to simulate the exquisitely sensual play of light and color on a Renoir canvas. But this motion picture, a static succession of poses and pronouncements, is stillborn. When Jean is asked: “What’s the war like?” his response, “C’est la guerre” (It’s war), falls flat. So, too, do most of the bon mots of the famous old painter. “A painting should be something pleasant and cheerful,” Renoir insists. “There are enough disagreeable things in life.” But though the man may have actually said something similar, the vibrancy of his work gives the lie to the idea that painting smiley faces is the crest of creativity. Renoir began his career as a porcelain painter, and, for all his fame, continued to call himself a worker, not an artist. His luminous labor was a struggle against the encroaching darkness.

In his 1962 book Renoir, My Father, Jean Renoir recounts how a journalist once asked his father how he continued working after arthritis crippled his hands. Pierre-August Renoir replied: “Je peins avec ma queue” (I paint with my prick). Bourdos inserts the anecdote by having the father say it to his son, but it is as if the director had merely compiled a checklist of Renoir quotations and felt compelled to scatter them throughout. Here is Renoir saying: “What interests me is skin,” and there he is observing, “What controls the structure is not the design but color.”

Making a film about a famous painter, composer, or writer is a particular challenge. Not only must you be historically accurate, but your film itself must be worthy of the artistry of its subject. Bourdos takes on two famous creatives; Pierre-August, whose painting The Bathers Henri Matisse ranked “among the greatest works of art ever painted;” and Jean, who was called “the greatest of European directors: very probably the greatest of all directors — a gigantic silhouette on the horizon of our waning century,” by Orson Welles in an obituary published in the Los Angeles Times. Despite the greatness of his subjects, however, Bourdos’ work is merely pleasant and cheerful.