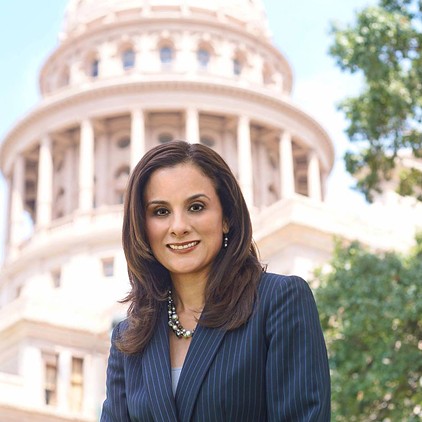 To land on Texas Monthly’s “The Best and Worst Legislators” list, a lawmaker has to stand out in either amazing or horrible ways. For the most part, the magazine’s survey, published after each regular session of the Texas Legislature, ignored San Antonio's state-level politicians (and that’s probably a good thing).

There was one exception: TM named Rep. Ina Minjarez as its one and only “rookie of the year” legislator (and that's indeed a good thing).


Minjarez offered more than two dozen substantive amendments to major legislation, including foster care reform bills and the state budget. She didn’t take the microphone often during debates, but when she did, her words had power. In speaking against the “show me your papers” amendment to the sanctuary cities bill, she noted that she had relatives who had fought in Vietnam and one who had been a prisoner of war. “If this amendment passes, we basically shatter all the work that our ancestors and our family members did to ensure that we have the most basic civil rights,” she said.


As the mag notes – and as previously dissected by the Current – the El Paso-born, S.A.-raised Democratic legislator was the House sponsor of David Law’s, an anti-cyberbullying bill that criminalizes electronic harassing or bullying of anyone under the age of 18. Gov. Greg Abbott signed Senate Bill 179 into law on June 9.

“It was an impressive performance for a rookie. We look for big things from her next session,” TM said about Minjarez, 42, who secured the Texas House District 124 seat vacated by José Menéndez in a runoff election against Delicia Herrera in April 2015.

Meanwhile, Texas Monthly lambasted Sen. Kelly Hancock (R-North Richland Hills) over the 2018 NCAA Final Four, which is scheduled to take place at the Alamodome, but could be pulled out of here if anti-trans bathroom bill legislation passes during the upcoming special session.


When the Fort Worth Chamber of Commerce came out in opposition to the bathroom bill, Hancock resigned his membership. Then, in a public hearing on the measure, a skeptical Hancock ruthlessly grilled the president of the Texas Association of Business over the group’s estimates of economic damage from the bill, including the possible loss of the 2018 NCAA Final Four in San Antonio. But just four years ago, Hancock passed a bill to give state funding to such tournaments because they “encourage robust economic growth,” as he said at the time.


The biennial series seems to rank actual legislative performance and not state lawmakers with criminal charges hanging over their heads. If the latter were the measuring stick, San Antonio might be at the top of the dis-honorific list this year. (Read more on Sen. Carlos Uresti, who federal prosecutors claim took part in fraud and bribery during a lavish rise to the top of Texas’s political totem pole.)