Rep. Joaquin Castro Says "Almost No One is Off Limits" in New ICE Orders 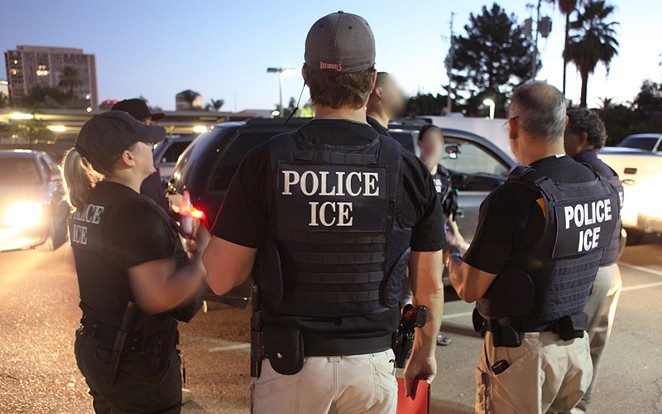 With Democrats blocked from attending immigration meetings and the White House denouncing a leaked memo suggesting a massive, militarized round-up of immigrants is on the horizon, it's hard to know who can give the public a straight answer on President Donald Trump's evolving deportation policies.

But San Antonio Congressman Joaquin Castro, one of the few Hispanic Democrats allowed into a Thursday meeting with acting U.S. Immigration and Customs Enforcement Director Thomas Homan, knows one thing for certain: Nearly every undocumented immigrant is at risk.

"ICE seemed determined to go after as many people as possible," he said on a Friday morning conference call with reporters. "Almost no one is off limits."

It appears the only undocumented people protected are former recipients of President Obama's DACA program — a promise to defer deportation of certain undocumented minors. That is, if they've never been charged with a crime.

"They made clear they weren't going after DACA folks," Castro said. But, he added, if an ICE agent happened to ask for a DACA recipient's immigration papers (say, they were at the house of someone being arrested) and discovered they had any charge (as small as an unpaid parking ticket or shoplifting arrest) on their record, they'd be arrested by ICE.

Castro mentioned the Tuesday arrest of 19-year-old San Antonio DACA recipient Josue Romero, who was taken to an ICE detention center after being charged for possessing less than two ounces of weed. Romero was released Thursday evening by ICE (for reasons that are still unclear), but the fact that he was detained at all underscores one troubling issue for immigrant rights advocates. Romero's lawyers claim the Bexar County Sheriff's Office "triggered" his transfer into ICE custody, which seems to mean the county jail is turning undocumented immigrants over to ICE even if they've only been accused (and not even convicted) of the most minor of offenses. The Bexar County Jail has yet to answer our questions about the case.

At the Thursday meeting, Castro asked an ICE agent about the rumors he and other members of Congress had heard about ICE agents checking immigration papers in church parking lots or near schools.

"He told us, 'We don't generally operate that way. But if an agent believes it's in the best interest for national security to do so, then that's up to them,'" Castro recalled. "To me, that sounds like a green light."

Castro also expressed concern for the Friday morning news of a pending White House plan (leaked to the Associated Press in the form of a draft memo) to deploy 100,000 National Guard troops to "round up" undocumented immigrants. White House spokesman Sean Spicer told reporters Friday the news was "100 percent not true," despite the 11-page memo being authored by U.S. Homeland Security Secretary John Kelly. Castro, who tweeted that Thursday's ICE meeting hinted at a "mass deportation plan," hadn't heard of any National Guard involvement in ICE work prior to the AP story.

"The AP report is very disturbing. I'm hoping its not true," Castro said. "But you get five different answers on controversial issues in the White House depending on who you ask."