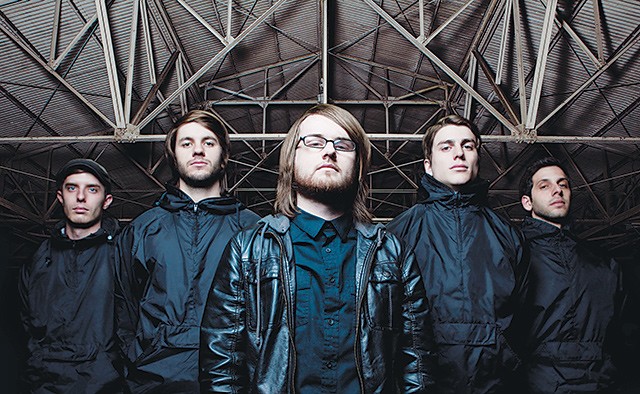 As part of the mostly Christian Screaming the Prayer heavy metal tour, Dallas’ Fit for a King comes to S.A. as proof that, at the very least, praying doesn’t hurt: the band’s initial output, Creation/Destruction, holds the record for most debut album first-week copies sold in their label’s, Solid State Records, history.

Originally planned as two separate EPs, Creation/Destruction — their first album with Solid State after 2011’s self-released Descendants — came out in March and sold 3,200 copies in the first seven days, reaching number 3 on Billboard’s Heatseekers chart, 10 on the Hard Rock chart, and 43 on the Rock chart.

“[The album’s success] was crazy to me, because we grew up listening to [label mates] Haste the Day, Underoath, and August Burns Red,” said screamer Ryan Kirby, one of the band’s two singers (the other being bassist Aaron Kadura, the newest member — “The vocals that parents would like are done by him,” joked Kirby).

The album, produced by Andreas Magnusson (Black Dahlia Murder), is a loud tour de force from a band that offers contrasting vocal styles and execution so tight it could allow a rhythm-less atheist to see the light, if not Jesus himself.

“Our drummer Jared [Easterling] is the biggest reason why we are so tight,” said Kirby. “Live, he’s pretty much like a human drum machine. You can’t be tight without a great, solid drummer.”

Very nice, very nice — I just have a problem thinking of Jesus when hearing metalcore screams. Besides, while secular heavy bands made a career of Satanizing metal, Fit for a King belong to the growing legion of bands trying to sanitize it. How metal can you get without having a hellish element thrown into the mix? I bombard Kirby from all sides, putting into question the very necessity of showing God our pure soul through menacing growls. He took all my shit with the calmness of a Zen master.

“We have songs that refer to Satan, but maybe not in the Slayer way,” he said. “The way I see it, metal has always been about aggressively writing about your life or how you feel about things. I’m a Christian and I love heavy music, so I just write about my life and my beliefs, and I want to be respected like I would respect somebody in a secular band.”

I’d just love to see Jesus’ face when listening to the screams.

“I don’t see why Jesus would see it any different,” said Kirby. “I mean, didn’t he say to ‘make a joyful noise to the Lord’? To me, [our music] is joyful and powerful. I don’t think adding distortion and low-tunings for guitars are going to change God’s message.”

Scream the Prayer Tour feat. Impending Doom, Fit for a King, Gideon, Wolves at the Gate, Everybody Dies in Utah and more