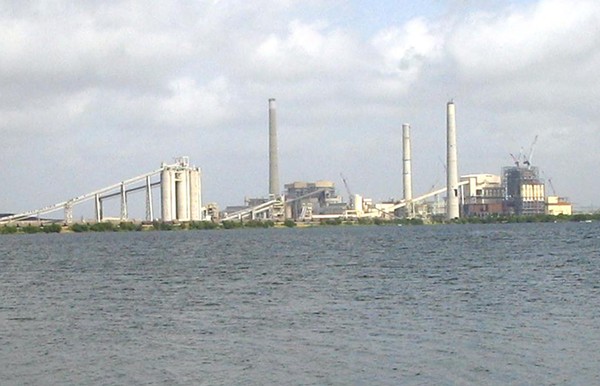 CPS Energy's two Calaveras Lake power plants are leaking contamination from waste created when coal is burned to produce electricity, according to the Environmental Integrity Project, or EIP.

Pollutants from coal ash are contaminating the groundwater, not just near CPS's Southeast San Antonio site, but at all 16 of Texas' coal-fired power plants that monitor waste data, EIP said in a study released today.
"The predictable result is widespread environmental contamination," said Abel Russ, an attorney with the Washington-based environmental group.

CPS officials said the company is a careful steward of coal ash stored at its site, meeting or exceeding levels set by the federal government and working with a third-party environmental monitor. The city-owned utility said it's also safely recycled around 8 million tons of the waste.

In December, CPS closed one of its two Calaveras Lake plants — J.T. Deely, which environmentalists dubbed "Dirty Deely" for its air pollution levels. However, the utility still operates the larger J.K. Spruce plant and stores coal ash onsite. Calaveras is a popular fishing spot, and contamination detected at the CPS site includes barium and cadmium, both toxic to fish, EIP's Russ said. Monitors also detected arsenic, lead and mercury, which can make fish unsafe to eat.

Indeed, elevated levels of 11 dangerous chemicals were found in at least one of the monitoring wells located around the CPS plants, according the report.

Beyond the CPS plants, EIP's research highlighted contamination at a coal ash-disposal facility operated by San Miguel Electric Co-op an hour south of San Antonio. Boron concentrates at that site are ten times higher than the EPA's health advisory level, according to the report. Contamination has also spread to a nearby ranch, killing vegetation and damaging soil, the group said.

"This is not what a typical South Texas pasture should look like," said rancher Jason Peeler, who worries he'll lose the property that's been in his family for four generations.

San Miguel officials were not available for immediate comment.

Even though utilities are shuttering coal plants — CPS, for example, expects to stop using the fuel by 2040 — EIP and other environmental groups warn that risks from ash waste are rising. The Trump administration, through acting EPA Administrator Andrew Wheeler, a former coal-industry lobbyist, has moved to relax ash-dumping rules.

"[Wheeler] is doing the bidding of industry and making a bad problem even worse," said Lisa Evans, an attorney for the environmental group Earthjustice.