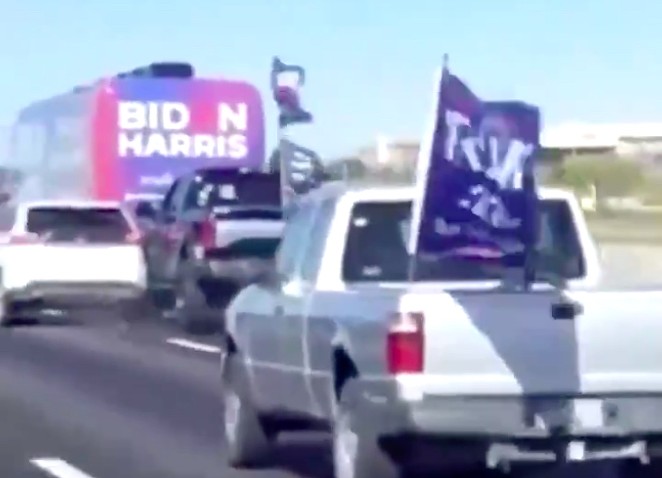 A driver who appeared to ram his truck into a SUV as part of a so-called "Trump train" swarmed a Biden campaign bus in Central Texas over the weekend also menaced San Antonio protesters with his vehicle in an earlier incident, according to a Texas Public Radio investigation.

The TPR story identifies the driver as Eliazar Cisneros, based on posts and video from the man's now-deleted Facebook account.

A viral video of the Trump train incident, which occurred Friday on Interstate 35 near San Marcos, shows the driver of a white SUV closely tailing the Biden bus. A black truck with a Trump flag is seen hitting the SUV several times, appearing to force it out of the lane.

No injuries were reported in the incident. However, both the FBI's San Antonio office and the San Marcos Police Department are investigating the incident.

Please vote. Please volunteer this weekend. The future of our democracy is at stake. pic.twitter.com/G0O4yg2vnJ

Citing previous news reports, the TPR story also identifies Cisneros as a driver who gunned his truck toward a crowd of Black Lives Matter protesters in downtown San Antonio in September. Additionally, he followed and taunted the group as they continued their march, witnesses said.

Cisneros identified himself to TV station KENS 5 after the incident and said the protesters should have stayed on the sidewalk.

"I didn't want to hurt anybody," Cisneros told the station. "You know, get off the street, get on the sidewalk and protest whatever you are protesting on the sidewalk. Stay safe."

Protesters described the incident as intimidation.

"That was not what we thought was about to happen," activist Camille Wright told KENS. "Intimidation, sure. Drive out of the crowd, maybe swerve around. Definitely didn't think that he was going to plow through."

TPR reported that public records show Cisneros has a history of criminal charges in both Texas and Florida.

Cisneros was arrested and charged with a DWI in September of last year and is still awaiting trial, according to the story. What's more, he was arrested in the 1990s and convicted for marijuana possession in Texas and put on probation in Florida for driving with a suspended license, the station reported.