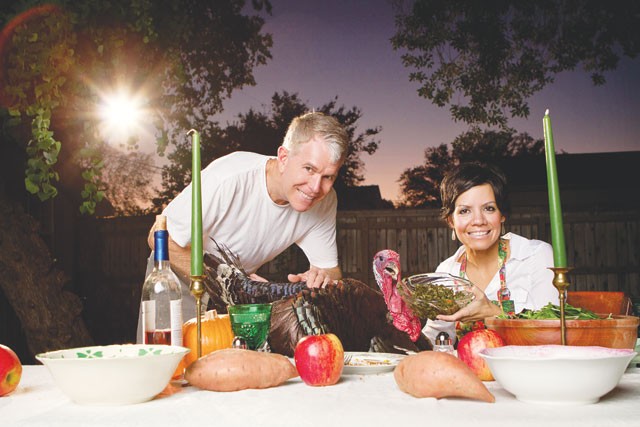 At small farms around greater San Antonio, some adventurous souls were picking out turkeys for slaughter. Some were even trying their hand at taking off the turkey heads themselves for the first time. But to satisfy the demand for those 47 million birds expected to be purchased for holiday meals this year, factory farming systems will do the bulk of the work. And those systems, according to the local animal-advocates at the local nonprofit Hailey Foundation and others, are inherently cruel ones. To get the heavy-breasted birds that we find in the grocery stores today, bird genetics have been manipulated to the point that the birds often suffer health problems, including leg and joint disorders and even heart disease, according to a recent nonprofit Farm Sanctuary report.

In a move to put the spotlight on that practice, the Hailey Foundation, a local nonprofit dedicated to "promoting practices and lifestyles that spare sentient creatures unnecessary suffering and death," purchased one such turkey from a small farm in Somerset. Now they're hosting the turkey at a celebration dinner ("Not on a dinner platter, of course, but in a large cage where people can see him," said local attorney and organizational founder Joel Hailey), and plan to release him again this week to the animal sanctuary Wildlife Rescue and Rehabilitation in northern Kendall County to live out his days. A similar event was performed by the group in 2008.

"We're trying to focus on the fact that these are beautiful creatures," said Hailey. "Benjamin Franklin considered them to be the national bird."

While it's hard to imagine the warty red, white, and blue face of a tom turkey juxtaposed over so many waving American flags today, the turkey has been a much more intimate part of America as a staple source of food for native Americans and colonial late-comers alike. (Interestingly, Franklin dismissed the bald eagle as a "bird of bad moral character" for its habit of stealing the hard-earned meals from smaller fishing hawks.)

This week's Foundation dinner isn't about nourishment from turkey flesh: but an emotional nourishment that comes from viewing life through another's eyes, in this case, the eyes of the season's most coveted bird.

With a Foundation colleague, Saenz purchased the turkey now known as "Jadon" (meaning "thankful" in Hebrew, or ominously "God will judge"), posing as a meat-friendly traditionalist. "Rather than take the chance of her saying, 'No. I don't want to sell to a bunch of animal rights people,' we said we wanted to kill him and eat him," said Saenz.

It was difficult separating the bird from its penmate, she said. "We tried our best to herd him to the car, but I had to lift him. I swear I almost broke my back. He was also very sad. He didn't want to be separated from his friend." And in an expression of what some will write off as blatant anthropomorphism, the practice of attributing human emotions to non-human animals, Saenz said Jadon was soon happy and "smiling." And if it weren't for the ability of turkeys to change the colors in their faces and necks and even inflate a tube of skin known as the "snood" over their beak when irritated, perhaps such allegations would stick. But Jadon's appearance, at least as I found him after he had been relocated to Hailey's backyard, suggests the bird is certainly content. And a smile seemed implied as he was hand-fed grain and canned corn at table.

Hailey said this week's event is not about converting people to a vegetarian diet, though that is "something for people to think about." And he recommended tofu-based Tofurky dinners this Thanksgiving as a place to start. "It's the healthiest option I can recommend: no cholesterol, high in protein, and no chance of any animal being harmed in a factory farm."

What about alternative, less abusive systems? "I'd prefer not to comment on that. I am a vegetarian, of course. I can't really endorse even the organic farming of turkeys. … We're just trying to let people know that these are affectionate creatures that need love and care." •

For more information, find the Haily Foundation online at haileyfoundation.org. Gloria Weers is a local chef some may remember from the cooking classes she taught at Central Market.

You can make more sesame oil and soy sauce to use as a marinade as the tofu turkey baste. This helps brown and give it more flavor. I personally like to make it a day ahead and just reheat in the oven.
Mash tofu well (I usually press the tofu to get most of the moisture out of it) and mix with 1/3 of the sesame oil and soy sauce. Line an 11-inch colander with a single layer of moistened cheesecloth. Transfer tofu to colander. Press tofu against the colander to about 1-inch thickness and fold edges of cheesecloth over it. Place a cake tin or other flat object over the surface of the tofu and weigh it down with a heavy object to press the liquid from the tofu. I find very little moisture comes out it if you press it in advance.
After the tofu has drained for an hour or more, hollow out to within 1 inch of the colander. Fill the cavity with your favorite stuffing, or use the stuffing recipe below. Pack in stuffing and cover with remaining tofu. Pat down so surface is flat and firm. Oil a roast or turkey pan, place pan over colander, and flip over so that flat surface of filled tofu faces down. Remove cheesecloth.
Mix remaining sesame oil and soy sauce to use as a basting liquid. Baste tofu with liquid and bake covered at 400 degree for 1 hour. Remove cover, baste, and return to oven to bake uncovered until top becomes golden brown, about one hour more. Baste often during remaining cooking time. It slices much better if it is chilled first and then reheated.

Dressing
1 batch of cornbread or package of cornbread dried stuffing. Cornbread recipe below with 1 pack Pepperidge Farm Herb Stuffing and as follows.

3 ribs of celery, chopped, 1 1/2 onions chopped, and 1 bell pepper, chopped
7-8 mushrooms, sliced
1 14-oz can veggie broth (my stuffing packages were large so I used three)
2 sticks margarine
1 package slivered almonds
1 tsp sage
1 tbs poultry seasoning
Saute onions, pepper, mushrooms in margarine, and add sage and poultry seasoning. Mix with some of the veggie broth and with stuffing. Add enough broth to moisten bread. Add slivered almonds. Use in tofu above or put in bowl and bake at 375 degrees for 35 or 40 minutes.

Mushroom Gravy
2 tbs sesame
1 cup flour (put in a dry pan and toasted till lightly browned)
2 onions diced
6 - 7 cups water
6 cups mushrooms, sliced
3/4 cups soy sauce
Heat oil and sauté onions and mushrooms. Mix flour with water. Bring to boil over high heat, stirring often. Then simmer uncovered over medium heat for half an hour stirring occasionally. (I blend it at this point, or after it has cooled slightly).

For a beautiful vegetarian Thanksgiving display, the tofu turkey can be served on a large white plate surrounded by roasted potatoes or sweet potatoes, carrots, garlic cloves or onions, shelled chestnuts or pecans, and stems of parsley, rosemary, and thyme. The veggies can be oven-roasted at 400 degrees for an hour, baked in a mixture of 1.5 cups red wine and 1/4 cup sesame oil. After roasting, the remaining juice can be poured over the tofu turkey and veggies.