by Bryan Rindfuss and Callie Enlow 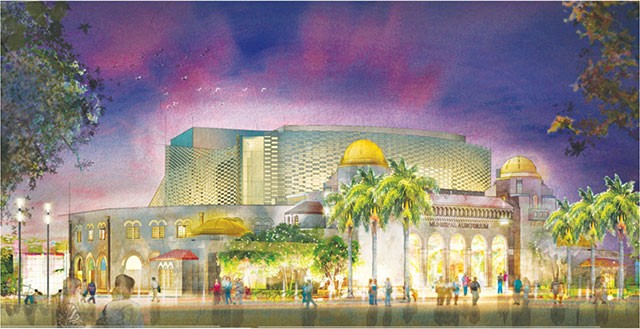 If you’ve ever witnessed what goes down when a designer puppy is brought home to a family with a faithful mutt in its sunset years, then you’ll know this can be a tricky, even heartbreaking, situation. As the dogs learn to coexist and cope with disparate energy levels, the family members ideally remember to spread the love (and petting) around to ensure the graying old hound doesn’t feel its been replaced by a tireless bundle of joy (cartoon thought bubble: “I’m not even dead yet!”).

This dynamic of how “the new” changes “the old” comes to mind as I consider the potential effects the opening of the Tobin Center for the Performing Arts might have on the Majestic Theatre, a National Historic Monument that was once the largest theater in Texas. With the San Antonio Symphony in the midst of its final season at the Majestic before relocating to the Tobin Center—which will also be home to AtticRep, Ballet San Antonio, The Opera San Antonio, Youth Orchestras of San Antonio, Chamber Orchestra of San Antonio and the Children’s Chorus of San Antonio—inquiring minds are inevitably wondering if other Majestic mainstays might succumb to the allure of a versatile, world-class facility.

Broadway in San Antonio’s 2013-2014 season at the Majestic wraps up in June—just two weeks after the Symphony’s 75th Anniversary Concert with Joshua Bell. With 85 dates left open by the Symphony’s departure, the Majestic will reportedly be an easier venue for touring acts (comedians, musicians, etc.) and local nonprofits to secure for performances. When reached for comment, Mike Rilley, general manager of the Majestic and Charline McCombs Empire Theatres said, “We’re looking forward to developing new relationships in an ever-growing cultural landscape and continuing to present the best in arts and entertainment to our community.” —Bryan Rindfuss

Earlier this year, San Antonio’s downtown vacancy space (at least for offices) hit a whopping 33.3 percent. While various ideas have been batted around, from charging a tax on absentee landlords to tightening up code compliance, none of these civic regulations have gained much traction. Instead, the City has turned to art-related interventions for some of these spaces. In 2011, Public Art San Antonio launched X Marks the Art, which places visual art installations inside and outside a few of these storefronts. The latest series, “Light + Technology,” opened December 4 and includes some notable SA artists, but the events page hasn’t been updated since May and there’s been very little publicity for the current series. In 2014, PASA should resolve not to let this effort fall by the wayside.

Another plan to consider punching up in 2014 is the City Center Development Office’s OPEN initiative, installing artisans and their wares in empty storefronts along Houston Street during Tuesdays and Saturdays for a few weeks during peak holiday shopping time. In a nutshell, the City hooked up eight vendors from artists to wine purveyors with property owners and provided temporary certificates of occupancy. The vendors and the City considered it a success, and two of the OPEN shops have been extended through February 1, thus far. Let’s do our part to support these pop-ups as consumers, and hopefully inspire the City to commit to and expand the program in the near future. —Callie Enlow