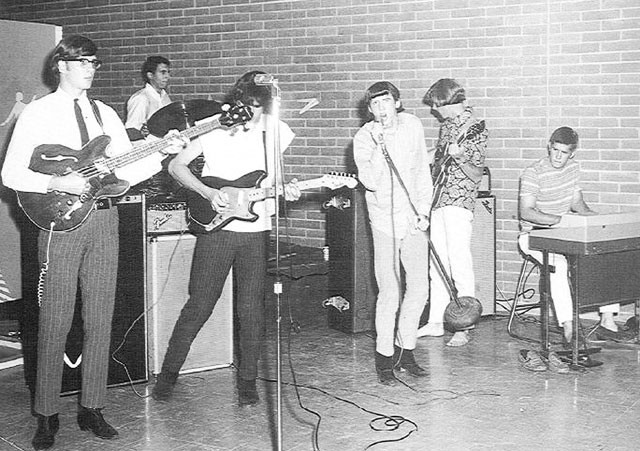 Next time you hear Bexar County District Court Judge Sol Casseb’s name, picture this: 43 years ago this Labor Day weekend, the gavel of the 288th was drumming for the Laughing Kind in a battle of the bands at the Teen Canteen. His rivals were Swiss Movement, an interracial quintet who played Austin’s prestigious Vulcan Gas Company and opened for Jimi Hendrix. In the most cosmic of coincidences, the two bands perform once again this Labor Day weekend at Floore’s. Yet, the Laughing Kind aren’t another bunch of grayhairs reuniting to make jokes about dropping antacid. Their music represents the vibrant but little-celebrated San Antonio golden age of rock ’n’ roll: the 1960s. Moreover, their foundation occurs at the origin of psychedelia, a sound that owes as much to Texas as California. For 10 years, the Laughing Kind were kings of the highway, and their history mirrors the change in San Antonio’s own musical generations, when the baton passed from the hippie rockers to the hard rockers and metalheads. San Antonio’s love of guitar crunch and volume took root in the ’60s when the Alamo City ruled South Texas as the rock ’n’ roll destination for touring acts, and the vibrant sound of its local bands blended on the radio stations in the HemisFair spotlight. Its well-developed mid-’60s youth scene included teens-only clubs like Teen Canteen, plus high school clubs like the Mule Stall, and a television show, Swingtime. KONO and KTSA played local music from the Laughing Kind, the Outcasts, the Chayns, Sir Douglas Quintet, and other regional Texas bands such as Zakary Thaks. And it wasn’t just white rock — Sunny & the Sunliners and Rene & Rene were early purveyors of Chicano soul, while the Commands, a black, post-doo wop quartet of airmen stationed in SA, charted regularly. Rock ’n’ roll reveled in its own teen years, and never again would the playing field be so leveled between audiences and the artists they loved. Music was the great equalizer between cultures, a common language spoken in 4/4 time. If you were young, you listened, no matter the ethnic background.

So how is it possible for this history to have vanished? Scant evidence includes Doug Sahm on the cover of Rolling Stone twice and Bubble Puppy charting with “Hot Smoke and Sassafras,” but the visual media that accompanies our memories is almost nonexistent for San Antonio’s ’60s. Only in late ’70s punk rock do art and music become important together again, and that spirit manifests itself today in the San Anto murals and Jerry Clayworth’s retro posters.

Yet from the late 1960s to the ’70s, artist Dan “Boogie” Winans captured the San Antonio zeitgeist, first in a series of seldom-seen handbills for the Sunken Gardens rock concerts and later community art. “My children of tomorrow are becoming heavy,” announces a 1969 poster for Austin and San Antonio bands, drawn in a whimsical cartoon style. An underground newspaper called Eaglebone Whistle briefly documented the counterculture, but the axis of cool was shifting northward.

And the Laughing Kind? In 1965, a charismatic Texan named Max Range headed up Kerrville folk-rockers the Lingsmen. Members Stacy Sutherland, John Ike Walton, and Benny Thurman exited to join a UT philosophy student named Tommy Hall with a teenage singer named Roky Erickson who’d released the 45-rpm “You’re Gonna Miss Me” with his old band, the Spades. They became the 13th Floor Elevators, architects of psychedelic rock. Range relocated to Port Aransas in 1965 to form Max & the Laughing Kind. According to early members Bob Galindo and the late Chris Holzhaus, Range tried out several lineups before settling on one with Keith Miller and Roy Cox. By ’66, Range and his name were gone, but he remains the unsung stepfather of Texas psychedelia. The next lineup of the Laughing Kind featured dynamic singer Tommy Smith and local radio success in 1967 with “I Could Have Showed You the Way.” Their name was golden: That Labor Day in 1968, the Battle of the Bands drew some 2,000 teenagers. Personnel shifted constantly in the early ’70s, with some members going off to college, and others drafted. John Schwertner — who’d joined when Sol Casseb was still drumming — finally packed their VW van and moved to Austin around 1972, drifting into country rock and pulling the plug on the Laughing Kind in the mid-’70s. By then, San Antonio’s mojo to attract edgy bands had been co-opted by Austin’s über-hip Armadillo World Headquarters, 80 miles north.

The last band business Schwertner did in 1975 was sell the Laughing Kind van. The buyer? Gregg Chesser, once the lead singer for those long ago Labor Day ’68 rivals, Swiss Movement. •

Margaret Moser grew up in San Antonio and writes for the Austin Chronicle. She is director of the Austin Music Awards at SXSW and founder of the Texas Legacy Music Awards.