March 03, 2014
comment
A newly released broadband adoption map, created by the Open Technology Institute at the New America Foundation, shows the disparity of Internet access in San Antonio along socio-economic lines, validating concerns over the digital divide. The maps come on the heels of the announcement by Mayor Julián Castro that SA is partnering with Google Fiber to bring high-speed Internet access to residents. Most recently, Castro vowed to make the deal a reality during last week's State of the City address, saying, "Mark my words: San Antonio will be a Google Fiber city." 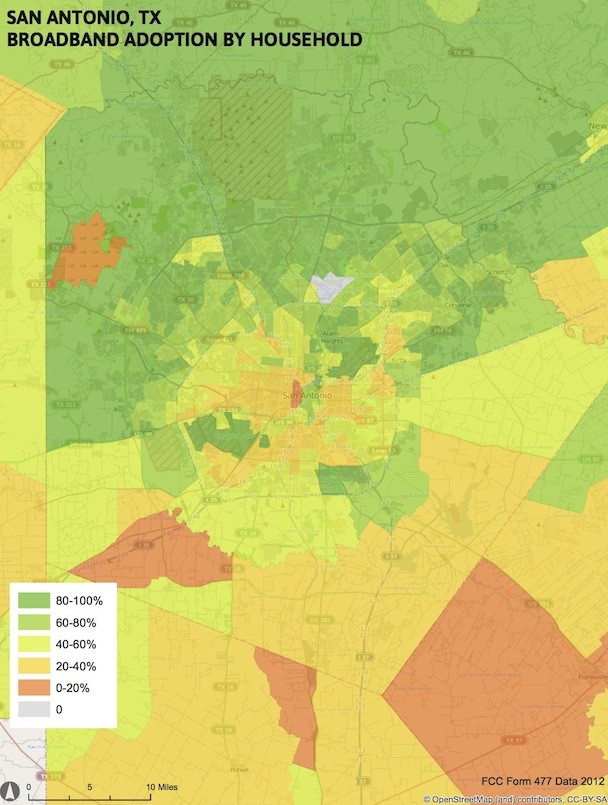 While homes in and around the downtown business area "overwhelmingly" have broadband, fewer than 20 percent of households west of I-10 and 1-35— in largely poverty-stricken and minority-populated areas—can say the same, an article in Atlantic Cities finds. Broadband rates increase with income; those in the urban core and in north SA suburbs have much higher adoption rates than their counterparts south of downtown. The SA map provides a fairly stark contrast to adoption rates in Atlanta, Ga. and Nashville, Tenn.

Castro included bridging the digital divide as a major reason for the partnership during the City Hall announcement, saying the introduction of a low-cost network will force ISP competitors to lower price and decrease the financial barriers to access.

However, in Kansas City, Mo., where Google Fiber first set up shop, reports show many still go without access. Several community members were still unable to afford Google's least expensive Fiber Internet plan, tech news site The Verge reported. Residents there can get gigabit Internet for $70 month, bundle the service with TV for $120 or pay a $300 construction fee for seven years of basic broadband speed, according to Google.

The tech article notes: "[...] for many of those in Kansas City’s poorer, historically black areas, Google Fiber never really seemed like an option. "When they came into the community, there was a lot of excitement, but then when the criteria came down, we knew that this wasn’t us," said the leader of a musician's group, one of the organizations participating in the creation of an alternate network to provide "truly affordable access" for the city's underprivileged.

While SA is still months away from even sealing the deal with Google, the question of whether or not Google and/or the City will ensure those who need access most receive it, remains to be seen.

If prior negotiations are any indicator, it may not be likely. According to the LA Times, Kansas City failed to,"insist that Google guarantee service to their most disadvantaged communities. The reason is obvious: They didn't have any real choice about the terms; it was fiber on Google's terms, or no fiber at all."