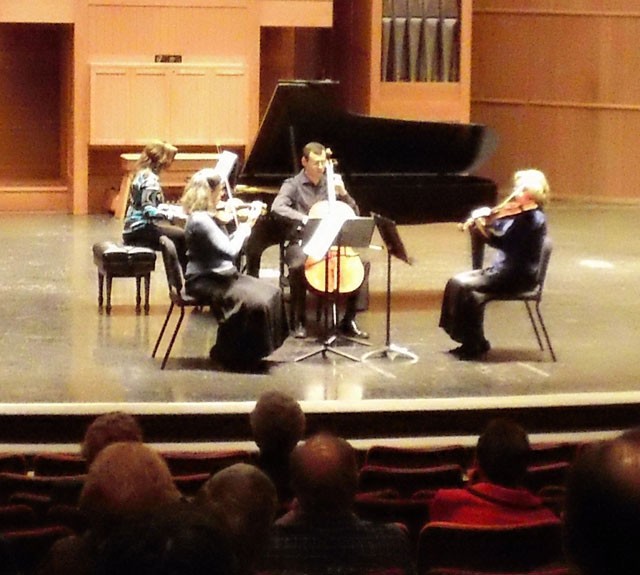 An interesting program of “Brahms and Beyond” by Musical Offerings opened the musical portion of the Brahms Festival in San Antonio Sunday afternoon (the first official event was a film at SAMA, as well as a KLRN special featuring the San Antonio Symphony). The concert included music by Dvorak, Dohnanyi, Schoenberg, and Brahms.

While the other composers certainly were influenced by and appreciated the Romantic composer, the meatiest and most masterful work was Brahms’ Piano Quintet in f minor, which ended the program. Violinists Sayaka Okada and Joan Christenson, violist Lauren Magnus, and cellist Ryan Murphy were joined by pianist Brent Watkins for a brisk reading. Lots of forward motion made the work lively and exciting. Especially nice was the Andante, un poco adagio which allowed gorgeous playing from Watkins and Okada. (A video of this movement is online: http://youtu.be/EBSKKPpw178) The finale featured syrupy goodness from Murphy’s solo and wonderful ensemble precision for the quintet.

The other star for the afternoon was San Antonio favorite, baritone Timothy Jones. Three Gypsy Songs by Antonin Dvorak opened the program, and were a true delight. (See a performance of the second of these songs, Songs My Mother Taught Me here:  https://www.facebook.com/v/560925553919827) Jones had a charm and brilliance with these lieder that was matched by Watkins collaborating at the keyboard. It is easy to hear the influence of Brahms with these works, as well as their mutual love for folky gypsy music.

Next up was a trio for strings by Ernst von Dohnanyi, another composer who looked up to Brahms, and who was helped out by the German master. Christenson, Magnus and Murphy played two movements of Dohnanyi’s Serenade that were not convincing or particularly moving. Rounding out the first half was the rarity Ode to Napoleon Buonaparte by Arnold Schoenberg. Jones was joined by Watkins and all the strings with assistance by San Antonio Symphony Associate Conductor Akiko Fujimoto. This World War Two era work is thorny at times, and lush at other points.

Throughout, Fujimoto ably led with vocal acrobatics by Jones. The quick talk and demonstration right before the performance with Eric Schneeman illustrated quotes of Beethoven and Le Marseillaise and gave a nice background for the uninitiated. I don’t know of many live performances of this work, but there are a handful of recordings. Sunday afternoon’s performance was a real treat.

Schoenberg will make another appearance at the Brahms Festival on Monday, February 11th with his orchestration of the Piano Quartet No. 1 in g minor. Other notable performances include the String Sextets with Camerata San Antonio as well as the complete Violin Sonatas with Cactus Pear Music Festival. More performance of the Brahms Festival takes place throughout January and February including all four Brahms symphonies and concertos. More information is online at BrahmsSA.com.