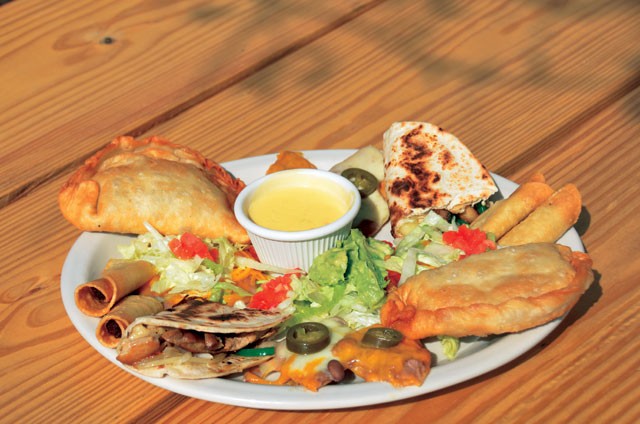 Founded in 1978, Pete's may have received celestial assistance a decade latter when Pope John Paul II passed by in his motorcade during the 1987 papal visit to SA. Or so many loyal costumers claim. The blessings have continued unabated since. Pete's still thrives, now at a new location just off the river on Brooklyn Street, and still purveys classic Tex-Mex offerings. For first-timers, Un Poquito de Todo (a little bit of everything) presents an overflowing plate of flautas, quesadillas, chalupas, nachos, and our favorite — beef empanadas. But by all means, try the titular tacos, spelled takos at Pete's in homage to the original owner of Tink-A-Tako, who helped Pete's start-up back in the day. Warning: You may be put off by the numbers on the menu, which range in the taco column from $1.80 to $3.49. But this is no high-priced fare. Instead, take caution to not over-order. These are some huge tacos; an inch-thick of filling is barely contained within once-folded house-made tortillas. The fat flour kind does the trick, but caution on attempting to pick it up in habitual fashion. The usual carne guisada, chilaquiles, and asada choices are fulfilling, in addition to not-so-common sausage and gravy, lengua, and shrimp tacos. They excel in the puffy version, with chicken or beef. Our new breakfast favorite is chorizo y papas; Mexican sausage percolated through pan-fried potatoes. Warning for vegetarians: the frijoles are cooked with a bit of bacon fat, but if you eschew meat, ask for "whole beans," kept safe from animal bits.